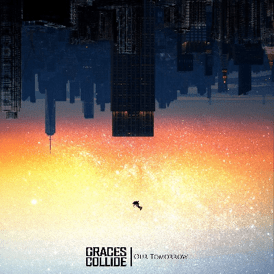 Brighton born Graces Collide have been beavering away in the background gathering up a storm of fans throughout the UK. Touring extensively, supporting other artists, Graces Collide have has slowly built up a fan base that sees them as the next band to watch out for. With this in mind, they have finally released their debut album, Our Tomorrow – the production team alone can get you excited with George Donoghue and Ramesh Dodangoda on board, plus guest appearances from The Rocket Doll’s frontman. So let’s see what’s in store for us here.

From the opening notes of ‘This Hell’ the influences of Tremonti can be heard all too well; the heavy riffs with reverb are the trademark of Mark Tremonti and are used with aplomb, right down to the vocal warble, which makes this sound more like a new Tremonti album that a new band; this is no sleight, this is a genuine observation that actually should be viewed as a compliment than viewed as anything else. In truth Graces Collide don’t hide from the fact with their list of influences or “for fans of” includes the aforementioned frontman. The album is in essence quite generic as a result but not from the usual status quo of the Hard Rock scene, instead from the developments of Creed, Alter Bridge and Tremonti. As the album continues, these influences don’t let up with elements of Feeder in ‘Another Sun’ thanks to the vocals of Nikki Smash of The Rocket Dolls; their video single in ‘Ride’ provides the aggression you would like to hear from the Hard Rock scene but it has layers of depth which gives it a more energetic feel rather than the usual pure angst that is typical of the scene. One of the key features of the album comes in the guise of ‘Fear Alone’ which shows off the skill of both percussion, and harmonic vocals; the song really soars and the influences of Breaking Benjamin sing out from its intro, right through to the last chug riff that finishes it all off, it’s a true hit in the making.

The album is a fuel laden 37 minutes long and full of throttle junkie style riffs and soaring vocals that you can sink your teeth into. The Brighton lads have a stellar album on their hands and they should be damned proud of their achievements here. As debut albums go, this is extremely well produced and has all the right elements for it to hit the scene like a juggernaut on the highway to hell. Graces Collide are flying the flag of the British Hard Rock scene and are showing that the future is bright for the UK. Definitely one to watch for the foreseeable future to see what they can produce.

Our Tomorrow by Graces Collide

For the Fans of… Tremonti, Alter Bridge, Breaking Benjamin

Check out Graces Collide on Facebook. You can preorder Our Tomorrow here.