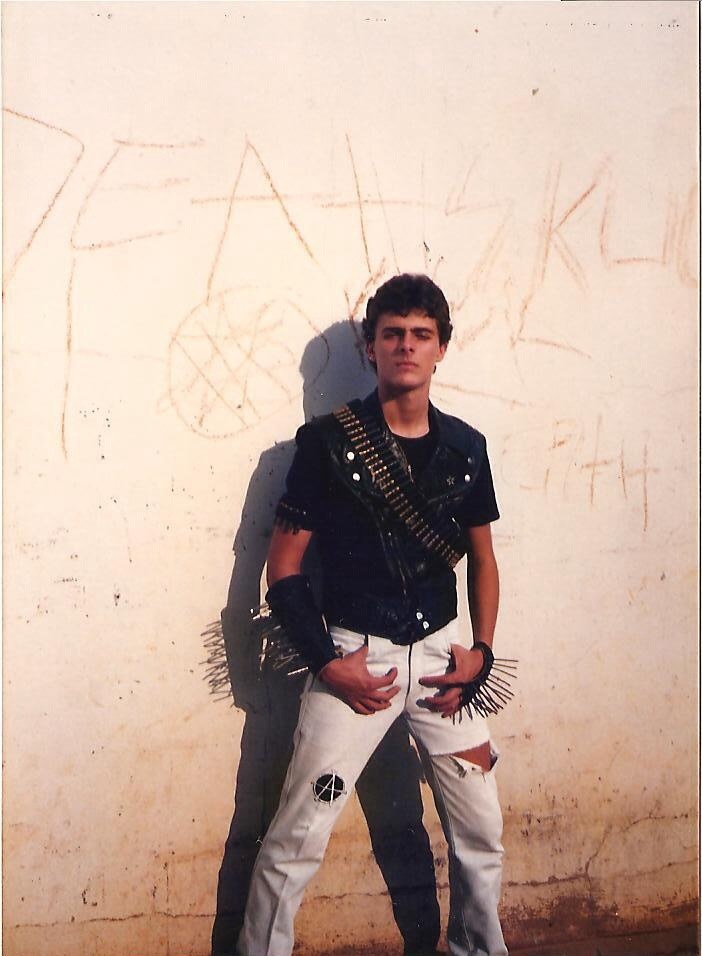 There are a few bands in the early to mid-eighties that help shape what would eventually become what we now know as black metal. These bands, all unique in their own right, brought a look, feel, and overall aesthetic to the metal genre that had not existed up to this point. Celtic Frost/Hellhammer, Bathory, Mercyful Fate, and Venom were all major players in developing this new dark avenue. A band just as important, if not more, was Brazil’s Sarcofago. The band’s debut release, INRI, has been hailed as one of the most significant influences on black metal’s corpse make-up and the arguably the creation of the blastbeat itself. The band since have released 5 albums, the second, Rotting, which is soon to be re-relased, is a monster of a record that built off INRI’s intensity and refined it. I have been graciously given the honor of interviewing Sarcófago drummer, Manoel “Joker”, due to this occasion.

First of all, thank you for taking the time out of your busy schedule to answer our questions. I have to ask about the cover. The artwork is absolutely sick and I’m sure turned a lot of heads at the time. Tell us about the artist and the concept behind the art for the “Rotting” album.
Joker: My friend Kelson Frost made ​​the cover of the album. He is an exceptional artist from Belo Horizonte and was the lead singer of the band Gothic Vox. I remember going to his house with Wagner to see the art still being painted. At that time he lived with members of the bands The Mist and Mutilator. Regarding the painting, an interesting detail is that he painted the figure of Christ without the crown of thorns. He leave up for interpretation on who the person in the painting really was. It could be Christ, or it could be anyone else. We respect this attitude and each one can interpret the art as they see fit.

2) How did the re-issue come about?
Joker: I really don’t know (laughs). It was a partnership among Cogumelo Records and the staff of the American label (Greyhaze Records). Rotting is a classic and has an impressive demand worldwide. 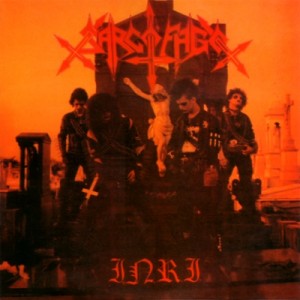 3) Looking back, INRI was such a monumental release. Did INRI have initial success, or is it’s legacy something that happened over time?Joker: INRI is a phenomenal album and is did Rotting and The Laws Of Scourge. Each has its own characteristics and all are important for Sarcófago’s history. And we cannot forget the collection Warfare Noise I; I love that album!

4) What was the attitude of the band at the time? How were you looking to follow up such a release, and in that case, how did you get involved?
Joker: Rotting originally came out over 20 years ago. We were young fans of heavy music and lived days of great euphoria in the Minas Gerais scene. The band was already famous in the Brazilian underground and started to become strong abroad as well. When thinking about Rotting, we knew that this next step should maintain a high level of quality. I believe we succeeded in this endeavor. 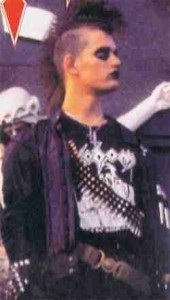 5) What did you think of DD’s playing on INRI? At the time I really didn’t hear anything like it. They were sort of blast beats before blast beats. Your playing seemed to bring a more thrash / hardcore punk style of playing to the band? Is that where your influence was coming from at the time?
Joker: For me DD Crazy was the creator of the blast beat, definitely. In my case it was an influence for sure, along the Finnish bands like Rattus and Terveet Kadet and American bands like Cryptic Slaughter and Strife. I would say that my style comes from the junction of these influences but we have different approaches. I always hit harder and DD he played more softly. I have total respect for DD Crazy and his work within the band.

6) There was a lot of talk of feuds with Sepultura. Did you guys actually have animosity towards each other or was it all rumors? What if any is your relationship with Sepultura now?
Joker: There were fights in the beginning, it really happened but I never gave a fuck for that shit. I always liked the two bands and the guys knew it when they called me to play with them. I think the biggest problem was between Wagner and Max. They have known each other since childhood and when Wagner left Sepultura this friendship ended. I wasn’t yet in the band when those problems began and the guys from Sepultura never had problems with me. Why should I worry about that (laughs)?

7) What do you think about the current trends in the metal genre? Also, what do you think of all the bands that you’ve influenced that intentionally tried or still try to sound like Sarcófago?
Joker: I think metal is always changing, some new things I like and others I do not. Back when we started, or stuff was also very new and fresh and many so called “metal purists” didn’t like it. I always tried to do my music without trying to sound like no other band, but I respect those who seek this path.

8) Are there any of these newer bands out there that you are a fan of? What are you listening to nowadays?
Joker: There are some bands that honor the legacy of Sarcófago such as Bode Preto or Scourge for example. I’m a friend of these guys and really enjoy the music they make. I keep listening to bands like Black Sabbath, Motorhead , Exodus, Exploited and Venom, but I also pay attention to the news too. The new Triptykon album, for example, is amazing! Among the new bands I can indicate John No Arms from Brazil. Those guys kick ass!

9) Has Sarcófago ever played outside South America? Is there any chance Sarcófago will ever play the US? Have there been offers?
Joker: The band played a short European tour in the early 90s but as far as I know it was something very badly organized and they only played in Portugal and Spain. There were always invitations for concerts abroad. And those invitations still happen to this day. However, I think the time of Sarcofago has gone.

10) What are you doing now and what is the future of Sarcofago?Joker: Of all the ex-members of the band I’m the only one who never stopped. Before playing in Sarcófago, I played in Angel Butcher, and now I play with Uganga as the lead vocalist. We’re a thrashcore band and we’ve been active on the road for over 20 years. We have 4 albums out and have toured Europe twice. If anyone is interested in Uganga, they can check out our new clip “Guerra” at the following link: https://www.youtube.com/watch?v=hK1rn6XxywU .
I don’t really see a Sarcófago reunion happening. But who can predict the future? If this happens one day and they need me I’ll be there (laughs).< .div>