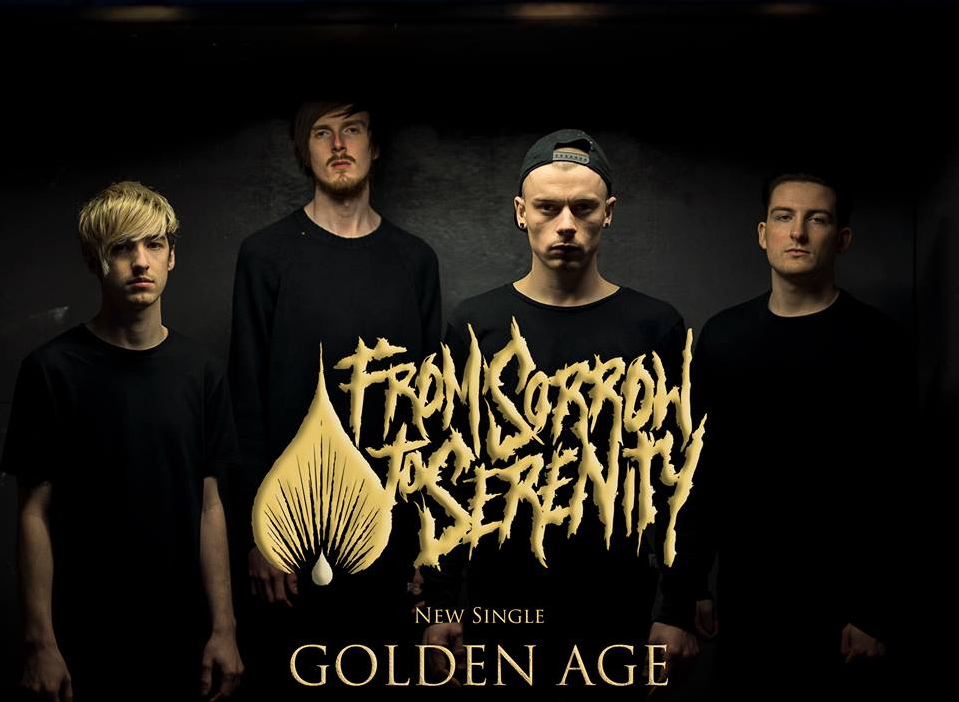 We stopped by Satans Hollow in Manchester to have a face to face interview with From Sorrow To Serenity before their gig, here’s what the guys had to say…

Hi guys how are you doing tonight?

Actually we are all full of really bad head colds, feeling awful to tell you the truth.

Aww shall I get the tiny violins out guys, you need to buckle up and crack on I’m afraid, part and parcel of being a touring band (laughs).

Hopefully we will be able to drink ourselves better after the show.

Or that could have the opposite effect and make you feel worse.

So you guys have just released your new single ‘The Golden Age’, which started on Monday in Birmingham how did that go for you?

It went really well, first show we were all full of adrenaline, really stoked to play and the crowds were really amazing too it was a really good vibe.

You got to support Martyr Defiled in Derby at the end of April how did that go?

That was a crazy gig.

Just the whole set up was mad there, nothing like we had ever seen.

All we are going to say is we hate stairs, carrying equipment up and down stairs is not something we enjoy doing, especially when you’re faced with drunk people after the set and trying to squeeze through crowds,

So you have a great gig coming up in June supporting Within Destruction, are you looking forward to this one?

Yea its going to be carnage, a great line up we can’t wait to go and smash it.

Have any of you guys got any projects outside of the band?

Steven is part of ‘Bleed From Within’ they have got some things lined up in the pipeline to watch out for.

Oh that sounds cool will have to look into that when I get back!

What would you say are the highs and lows of being in a touring band?

Sharing a van means sharing each other’s germs, which means if one of us gets ill we all get ill like we all are at the moment.

Sharing’s caring, that’s what I tell my little girl! Ha-ha!

The highs of being in a band is going out and performing on stage even if it’s a small intimate crowd, to then being in front of a large crowd of hundreds, we love it.

Outside of music what do you like to do in your spare time?

Apart from work, sleep and touring with the band there isn’t really any time in between at the moment. When we come back from tour we spend time with our loved ones be it family, pets, partners.

Where can your fans find your music?

You Tube, Spotify, Amazon Music, Deezer – head over to any of those to check us out, ultimately you can find us on Facebook as well. Hit us up we are always free for a chat.

Is there anything you would like to say to your fans/followers?

Thanks for your time guys!

Check out From Sorrow To Eternity HERE

CategoryInterviews
TagsBleed From Within From sorrow to serenity manchester Satans Hollow