I got to sit down with the members of Seven Spires, hybrid metal and symphonic power metal outfit out of Boston, for their first ever show in Canada and have a chat. Here’s what transpired.

So how’s your experience in Canada so far. I think it’s the second time you’ve been here?

Adrienne: It’s the first time we’ve been here as a band and my second time here, personally…and, I always love it. Just, I don’t know, its peaceful somehow. I don’t know what do you guys think.

Chris: It’s my first time in Canada and so far I’ve only been at the border….(laughing)…where they were searching our van. On the road, in traffic, that’s all I’ve done so far.

Sort of we don’t have thin mints but we do have mint cookies that are similar. Correct me if I’m wrong, I’ve been following your Instagram and social media, but you guys are recording a new album?

Jack: We have recorded a new album. That’s just about all we can say this time.

Adrienne: It’s in the mixing stages at this time and Chris is on the album this time

Peter: It’s the first album with all four of us so it’s been great.

Jack: We’re working with the same producer again this time, Sascha Paeth, who produces, like, Kamelot

What’s the direction going to be? Is it still following the same aesthetic vein as Solveig.

Adrienne: It’s sort of more into where we ventured with Solveig.

Jack: It’s more of the path that Solveig laid…the story is geared a bit differently and we like to use textures to help tell the story so there’s some stuff you’ve never heard before that’s going to be on there.

Adrienne: We’re exploring more of the doom stuff and the black metal stuff.

Jack: So its kind of more of what we already are

Adrienne: But it’s not like more of the same. It’s evolved and hopefully since we’re a few years older since we recorded…

Jack: And as musicians, it’s been us having to push forward all as musicians and each part we played has been taken to the next level.

Well you answered my next question for me.

Adrienne: We like to be efficient;what was your question?

How has your experience changed your outlook as young people in a tough business and how has it shaped where you’d like to go with the next album?

Adrienne: well were over 21 now so we’re not getting kicked out of our own shows.

Did you get kicked out of your own show?

Chris: I’m still under 21 and there were signs everywhere saying «under 21 no entry.» and I dodged the ID guy…. and uh Craig the guitarist and vocalist for Hate Storm Annihilation was like, «don’t leave this green room» so basically I had to hide down in the basement or «the green room» for like five hours.

Adrienne: With no food.

Chris: Yeah I made Jack get me subway and it sucked cause I had to miss our Seventh Brigade meetup

Alright I have one for Adrienne. Because you’re a woman in metal, and I have to ask this question,

What advice would you give to female musicians or fans when it comes to being in spaces that are not as female friendly, especially the internet?

Adrienne: Oh the internet is the worst. Advice, it’s really hard for me to give advice because I’m still hurt by things I read, like the «kill yourself» comments but its more like the comments…actually I can logic myself out of them and it all depends on the person and for me logic works so if someone says to me I’m ugly or that I don’t have powerful vocals I can say to myself «well how can that be if I was in Revolver’s ’hottest chicks in hard rock’ and was a vocal principal at one of the best music schools and these guys are just sitting in their rooms doing nothing». Aside from that it’s confidence, like just do what makes you feel good and you will draw other people who like that as well to you, and then you’ll all be doing it together and all feel good together and you wont give a fuck about what anybody else says.

It was clear enough to me. Alright could you tell us a little bit about your approach to songwriting as a band?

Adrienne to Jack: You wanna take this one?

Jack Yeah sure. Um, so, most of the songwriting is actually done by Adrienne and she orchestrates and does the keyboards and melodies and everything and if I’m correct it usually starts with piano and vocals, and then I’ll typically fly to her place in Texas with my guitar and we’ll hole up for like a week and a half and we’ll write up the bass parts and the guitar parts…

Jack:  Yeah and we’ll get a demo going that we can send to Peter and Chris who are, like, masters of their instruments beyond anything we can come up with and they make, like, the real parts. The typical process is that we write the songs way ahead of time and then let them sit so we can come back and listen to them with fresh ears.

Adrienne: Like album three is already on its second draft and has been since last year.

Jack: That’s pretty much how it happens and the state of things that she’ll send me varies from fully completed stuff to just parts of vocal lines or piano.

Adrienne: And then we eventually get together and workshop stuff as a quartet…

Peter: Yes, I love that part of being in a band. That’s probably the best part of getting to be in a band…

Adrienne: Like polishing everything up and really getting to see everybody shine…

How do you guys keep yourselves healthy and alert, especially on the road?

Peter: It’s definitely a matter of…at this point where were in a van with another band…we sleep at any possible opportunity which is typically in transit and we keep alert by knowing who is the most tired and who is the least tired..

Adrienne: Giving sleep priority to people who need it…

Adrienne: And trying to drink enough water which is hard cause sometimes the venue doesn’t give you water….

Jack: So it’s the basics of anywhere else…eat good food, drink lots of water and the fact of us being able to do it or not at any given time.

Adrienne: Yeah, like we’ve been together for years but its been interesting learning whole new group dynamics of other bands, like Peter and Chris went to school with Hate Storm Annihilation but they’re basically strangers to me and Jack.

Jack: Just jump on it.

Adrienne: Yeah, like, «Hi my name’s Adrienne we’ll be living together for the next two weeks…»

Alright, here’s a random question for you. Are any of you synaesthetic?

Adrienne: Is that like you hear music and smell things?

yeah that’s a type of synaesthesia!

Jack: We’ll often use words that are non musical to describe musical sounds. Like guitar players do it a lot well be like dude your sound is so fat, or it sounds sooo creamy… or like what does that mean?? But sometimes Adrienne and I will like you know listening to an overall album and choosing colour schemes we’ll be like this seems like a dark red…

Adrienne: Phrygian to me is like a slytherin green and slithery….like…*sings phrygian scale* it’s very green to me. Mixolydian is yellow…

Jack: It’s not something we are necessarily a good example of but we definitely use these things to relate…

Yeah thats synaesthesia for sure. For me Phrygian and especially Phrygian dominant is very indigo blue and super round…

Adrienne: Oh! Indigo blue? Okay… Round yeah I can see that too. I think of it as slithering, and snake-like..

Peter: Another degree of that is locations of things too like when you listen to something there is a location or setting associated with that and a picture in your mind and colours applied as well, which is also a really cool thing.

Adrienne: So you have synaesthesia.

Yeah two types. Personality colour and timber colour, like a person’s voice or the overall tone of a song…

Adrienne: Interesting….We should talk about this later!

I have one more question left, just the typical like anything you’d like to say to the Seventh Brigade here in Canada or the fans in Europe who are reading All About the Rock?

Adrienne: You have anything to say?(looking at Peter)

Peter: We are so happy to be in Canada and we are extremely excited to revisit and explore and meet all the wonderful people who have given us the support to do what we do now and we look forward to future adventures in Europe!

Jack: And all of our fan pages as well. Sevenspiresband.com. We have a twitter and a YouTube

Adrienne: And we have a highlight series on our Instagram if you wanna see Chris throwing cheese at Pete and all kinds of other things.

Jack: If you like us and wanna see us in your town just spread the word and throw our music at people. 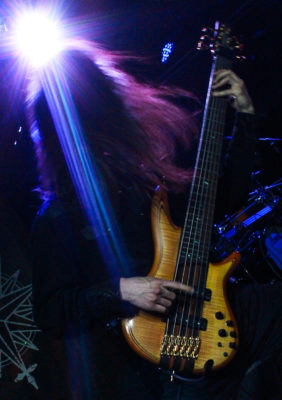 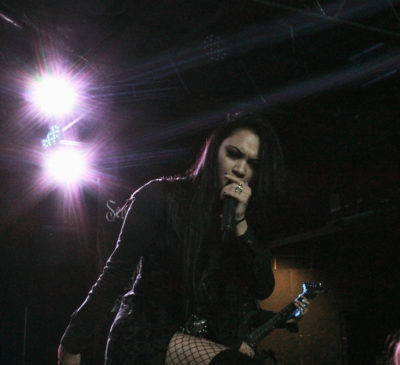