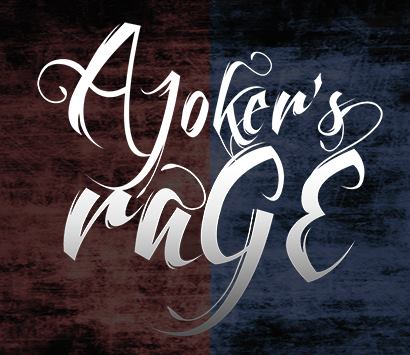 Zak from A Jokers Rage took time out of his busy schedule to sit & have a chat with myself.

We first came across you guys in March at Hard Rock Hell United 2 in Wales where you totally overwhelmed us with your music. Not many bands out there would do a cover of 2pac’s ‘California Love’, where did that idea come from?

We thrive on being creative and diverse. No offence to anybody else but there’s nothing spectacular or particularly interesting about a rock band doing a rock cover or a metal band doing a metal cover. I mean yeah I get it…you pay tribute to your peers and influences but where’s the challenge? When we first started we impressed a local promoter who wanted us to play a set at his festival but we didn’t have enough of our own songs yet to fill out a whole 45 minutes. So the logical step is to throw in a cover or 2 and covers are great if you’re going to do something that surprises the audience and challenges them as well as your own musical abilities. I’m a huge hip hop fan and that song is a real party anthem. From day one it worked and we’ve really made it our own now. If I wanted to test any bands musical abilities I’d insist they do a cover outside of their comfort zone.   Then you can really tell the men from the boys so to speak.

You guys recently did a gig with Knock Out Kaine at the Key Club in Leeds, what was that like?

We actually did 3 dates as main support for them on their headline tour. We get on great with those guys. Musically we’re chalk and cheese but again if the quality is there then diversity is the way forward in our eyes and like us they are top quality musicians at the top of their game. I felt bad that not many people turned out to the shows but that’s a prime example of how hard it is these days with so much live music in the world to choose from. But I have so much respect for them because they live by the same code as us in that whether there’s 10 people in the audience or 1000 you play every show like your headlining Wembley. But despite small audiences we sold out of T-shirts and CD’s which is a really good sign that we’re doing something right! especially given that this is our first year really of being ‘discovered’ by people and already with merchandise selling out and more and more gig offers coming through the door we’re ridiculously excited about the future.

You also played a tribute festival in York – ‘Fake Festival’, how was that for you guys playing alongside cover bands?

Fake Festival is a huge brand now that puts on all these awesome tribute bands in a huge marquee in almost every city in the UK and its growing bigger and bigger. It gives local bands a chance to showcase themselves during the day to guaranteed audiences that they normally wouldn’t get chance to play in front of. This was actually our 2nd year in a row playing it as the fans demanded we came back so we went at them even harder this year and gave them a real 10 out of 10 show. Such a great day and night out. Would recommend anyone musician or not to find their local fake festival and get involved!

We heard you blew the roof of ‘Breaking Bands Festival’, to the point where capacity was at its limit within the venue, you managed to wake everyone up and drag them out of their tents with your music, which must be a pretty incredible feeling.

It’s a great feeling and it keeps happening every time. The best feedback that we get a lot is when people tell us they literally couldn’t help themselves and just lost their minds and hat to dance and jump and lose their inhibitions. That’s the reaction we’re looking for and we’ve got it down to an art form now. It may sound big-headed, but if you come to our show we will have you in the palm of our hands within minutes no matter how early in the day it is or how hung over you are.

You have got the almighty ‘SOS Festival’ coming up in July are you guys excited about this?

We can’t wait. Again we’ll be treating it like we’re headlining Wembley. We’re not coming to take part, we’re coming to take over. The line up is fantastic and we’re honoured to be playing with a great calibre of bands and working alongside such a great promotion. Make no mistake though, we’re coming for everyone’s blood. We’re coming to blow the place apart so that we’re the headliners next year. We’re just getting warmed up.

We here that one of your gigs was cancelled while out on tour, how do you guys overcome obstacles such as this and what keeps you going?

We judge every situation on it’s individual merit and never spit our dummy out.   We’ve yet to experience the pressure of headlining our own tour so essentially the responsibility lies with the headline band and the promoter. All we can do is promote the show and play the best we can as we always do. If the powers above us cancel a show for whatever reason we just try to turn every situation into a positive whether it’s learning from other people’s mistakes or our own mistakes and then creating something bigger and better in the future. If a show gets cancelled we’ll use that time to work on new songs.

Reading your blog, we see that you use the jokers game face as a way to escape reality and emotions, and music sees you through, a joker which can be either euphoric or demonic, so when you put on your war paint for a gig, if it’s a ‘smiley’ joker is this the mood you’re in?. Does your game face reflect your mood?

AND WE HAVE A WINNER! congratulations, you’re the first person ever to investigate that question! whilst that might not be true for the other guys in the band. My ‘GameFace’ does indeed reflect the mood I’m in that day and the differences are very subtle. It might go from a full smile to a half-smile to a straight smile to just no smile at all with bright red lips or pure black lips.   The secret is officially out. You got me.

Which band have you most enjoyed playing beside and why?

We appreciate every band we play alongside no matter how big or small they are. It takes a lot of heart and soul to be in this game. You get your heart torn out every fucking day and the ratio of opportunities you receive vs how good you actually are is shocking. So anyone who has the balls to play alongside us is a legend in my eyes. Especially if they have the balls to go on after us 😉 haha  Even The Darkness admitted to being a little insecure having to follow us on stage once. Bless em.

Which has been your favourite venue or festival to play so far and why?

I think the Hard Rock Hell United/Hammerfest show was my favourite so far of this year simply because we had the worst slot of the day i.e first on, nobody knew who we were and everyone was hung over so it was a challenge to make an impact on everybody and despite being ridiculously hung over ourselves, we did it. Not only did we do it but we got credit for doing it from the fans which was awesome. I asked if everyone wanted to see us back next year on a bigger stage and the whole arena roared! Shame none of the organisers made a note of it because we haven’t been asked back. Shocker! There goes that ratio I was talking about again haha.   I equally loved doing Raz White’s Rockmantic all dayer at the Brickyard in Carlisle. Again we were on very early and no body knew who we were. But again we took on the challenge and made such an impact that we were the first band to be booked again for next year this time at the top of the line up. Some people do take notes of whats going on.

Ok it’s a bold statement, but what the fuck… you only live once right? Within 2 years I want to be supporting Muse, any stadium with do. As long as they chuck in a few beers. That’s not asking too much is it?

We look forward to catching up with you guys at SOS Fest!.

We look forward to it even more!   Much love and skull fucks.   Zakky Boy x

See you soon & thanks for your time