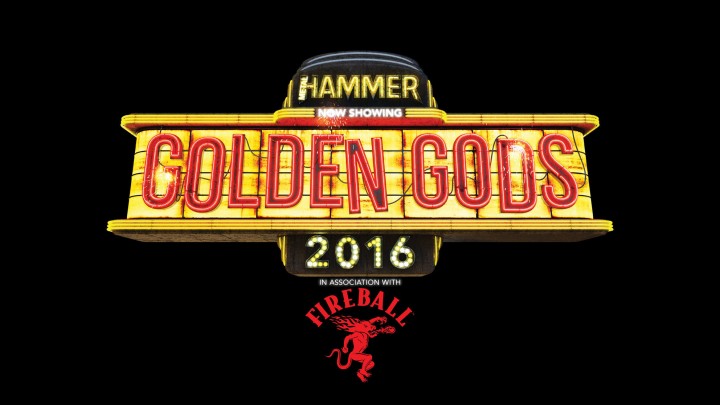 This year, Metal Hammer magazine celebrates its 30th anniversary, and the Golden God Awards 2016 are going to be the biggest ever! Taking place on Monday June 13th, this year’s awards are moving to a new home at the legendary Eventim Apollo (formerly Hammersmith Apollo) for the first time in the event’s history.

Tickets are available in two ways:

Simply vote for this year’s winners at www.metalhammer.com/awards to be in with a chance of winning a pair of tickets – voting is open NOW.

Alternatively, tickets are available to buy now for £6.66 at www.eventim.co.uk/goldengods. TeamRock and Eventim UK, the official ticketing partner of the Golden Gods, will donate all profits from ticket sales to the charity Heavy Metal Truants in aid of Nordoff Robbins, Teenage Cancer Trust and Childline.

The Metal Hammer Golden God Awards in association with Fireball is the heaviest awards show in the world, and the only one that truly involves the fans. There are no tables. This event is unique and brings the fans shoulder-to-shoulder with the bands and artists. One giant mosh pit celebrates the evening’s winners, alongside live performances from some of rock’s most exciting and influential bands. Previous years’ performances have come from Motörhead, Anthrax, Machine Head, Steel Panther and Ghost to name just a few, and this year’s live performances will be announced imminently.

Steeped in musical history, the Eventim Hammersmith Apollo is one of the most iconic music venues in the world, and over the years has played host to the world’s most important bands, including the mighty Motörhead, who named their iconic ‘No Sleep ‘Til Hammersmith’ live album after the venue. The album famously reached Number 1 in June 1981, 35 years to the month of this year’s awards, making the Apollo the perfect venue to pay tribute to the life and legacy of Motörhead’s iconic frontman, Lemmy. There’ll be more on this celebration to be announced soon.

“The Metal Hammer Golden Gods are our way of saying thank you to the genuine fanatics out there who’ve supported us for 30 years,” says Metal Hammer editor-in-chief and TeamRock Executive Director Alexander Milas. “It’s a party, it’s an award show, it’s a horn-throwing salute to the great and good of our community who’ve made our music the greatest cultural phenomena of the 20th, and now, 21st centuries. It’s only fitting that we’re holding them at the Eventim Hammersmith Apollo. As a cultural landmark and a living institution, it’s hosted some of the greatest, most iconic artists of our age, including the dearly departed Lemmy Kilmister who we’ll be paying tribute to on the night. With the help of our friends at Eventim we’ll be putting proceeds from our £6.66 cover charge towards TeamRock’s very own charity, the Heavy Metal Truants, whose annual cycling pilgrimage from London to Download Festival has already raised £232,000 for Teenage Cancer Trust, Nordoff Robbins and Childline. It’s not just going to be a great night, it’s going to support some great causes, too.”

Simon Presswell, CEO EVENTIM UK, says, “We are delighted to have been appointed ticketing partner to The Metal Hammer Golden God Awards. The Golden Gods are an institution in the metal community and it’s a real honour to be involved in this very special year where we will not only see the mighty Lemmy Kilmister remembered, but the proceeds on the night will go to a number of hugely important charities.”

Honouring the new noise that’s been making our jaws drop

More evidence that the UK scene is on fire right now

We Came As Romans

Through showmanship or smashing stages, fistbumps for these venue-wrecking heavyweights

Bring Me The Horizon

New Years Day – I’m About To Break You

Best Album – Dedicated to the very best album released during the last year, this remains one of the most prestigious awards of the night, with previous winners including everyone from Faith No More to Lamb Of God.

Riff Lord – Every great metal band has a great guitarist, but who is a true god on the axe? This year’s winner will be joining the likes of Slash, Dave Mustaine and last year’s winner, Brian May!

Inspiration – Awarded to an artist who isn’t just a hero to us, but to the countless bands that have been inspired by them over the years. Twisted Sister, Paradise Lost and Tom G Warrior are just some of the previous winners.

Icon – When a heavyweight transcends their own scene to become a true symbol of everything we love about heavy music – a true measuring stick for metal itself.

Global Metal Award – Dedicated to bands who have had to fight twice as hard to get their art recognised in their homeland – a symbol of metal’s ability to break down all boundaries.

Spirit Of Hammer – A special award given to a person or people who understand and embody everything we hold dear in metal. See previous, legendary winners including Sir Christopher Lee and Brian Blessed!

The Golden God – The Big One. An award given only to the mightiest, most important names in our world – those that have come to define heavy music over the past 40 decades – names such as previous winners Dave Mustaine, Kerry King, Joey DeMaio and the one and only Lemmy.