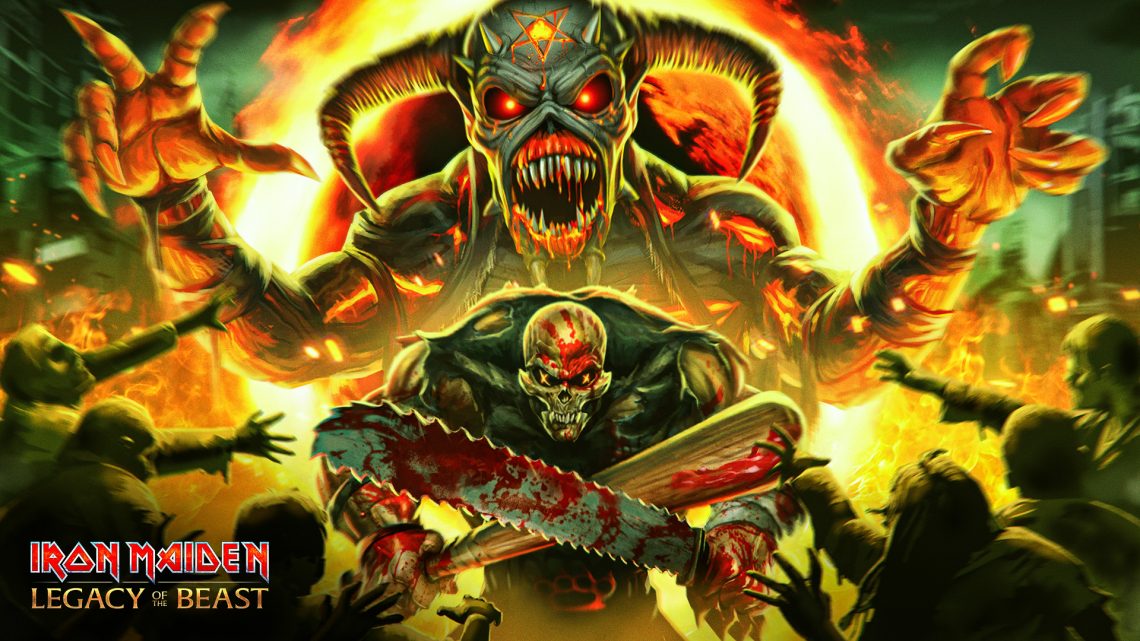 Following several successful collaborations Legacy of the Beast is now teaming up with Five Finger Death Punch! Iron Maiden: Legacy of the Beast needed a character that would fit perfectly into a story with Magma Beast Eddie, a scheming denizen of Hell itself, born of fire and darkness. This latest Eddie was released as a special edition of Beast Eddie, uniquely created for Legacy of the Beast during Maiden’s 2019 leg of the tour and will herald Maiden’s return to the Americas for 29 shows on August 27th in Curitiba, Brazil and concluding in Tampa, Florida two months later on October 27th.

The week-long event will take fans and players on a journey with Magma Beast Eddie and Knucklehead, a fierce warrior and a brutally efficient combatant who also guards the gate to Purgatory. As civil war wages in Hell, demons and devil-kin pour out to take advantage of the chaos. The gate to Purgatory, the most exposed entrance to Hell, is overrun. Even a powerful warrior such as Knucklehead has his limits, and as the demons escape through the gate, a mysterious new individual makes his presence known, offering assistance – but at what cost?

When asked about Knucklehead and Magma Beast Eddie teaming up in Iron Maiden’s Legacy of the Beast game, Zoltan Bathory, founder and guitarist for Five Finger Death Punch said,

“You know, it’s an unexpected and impossible dream for me and my band that my childhood heroes – in this moment in life –  are being let into the beautiful landscape of the game,” Zoltan continued by exclaiming, “to me Iron Maiden was the band that got me into heavy metal and slung me onto the path of my musical journey. Iron Maiden created a metal community when we were growing up – it was a brotherhood, and with this game, they’re doing it again because they’re bringing together all of these bands, and their mascots and it has this feeling of community. To me, that was very important about what got me interested in the genre in the first place.”

“For over a year we have wanted to collaborate with Five Finger Death Punch and create Knucklehead as a playable character in the game. Knucklehead is one of the fiercest metal mascots and the perfect accomplice to join Eddie in battle against the hordes of demons as they try to escape Hell. We had an awesome time working with Zoltan on the Afterlife Dungeon concept and are excited to finally be able to invite fans to experience it.”

In Iron Maiden: Legacy of the Beast , metal and RPG gaming fans take on the role of the band’s iconic mascot, Eddie who travels across a spectacularly diverse array of worlds by traveling through time in captivating 3D environments. Eddie appears in many forms, each a part of Iron Maiden’s rich history, and each with a set of special powers and abilities.

Players can earn the Knucklehead character for FREE from our newest login calendar starting Tuesday, July 12th. Log in any 7 days between July 12th and August 11th to earn awesome daily rewards including Knucklehead himself on the 7th day!

Over the years the game has expanded to include 25 dungeons and 6 unique Worlds, from the pits of Hell, Ancient Egypt, World War II to the far future, hundreds of characters including 90 Eddies based on classic Maiden album covers. A vast array of enemies – corrupt Demons (Lucifer, Baphomet), Gods (Horus, Osiris, Odin) and Monsters, a bloody Player vs Player Battle Arena and a ruthless Gauntlet feature designed to satisfy new players and hardcore long term players. The latest feature ‘Clans’ allows players to join forces with their blood brothers to complete team tasks and face off against monstrous Raid Bosses. All to an in-game soundtrack of over 30 Iron Maiden tracks including – The Trooper, Where Eagles Dare, Aces High and more.

Iron Maiden: Legacy of the Beast, is an action-packed, free-to-play mobile game available on Apple’s App Store and Google Play.

Five Finger Death Punch continues to tease their upcoming album by releasing a new song “Times Like These” listen HERE. 5FDP just recently broke the record for most consecutive #1’s on Billboard’s Mainstream Rock Chart as “AfterLife” became their 13th #1. The band has released the title track, “IOU,” and “Welcome To The Circus” so far, giving fans a preview of their most innovative body of work yet. Watch “Times Like These” HERE and pre-order AFTERLIFE, available August 19. Full track-listing below.

“AfterLife” and “IOU” were met with rave reviews from Loudwire and Guitar World, respectively. Loudwire proclaimed the first single was a “hard-hitting rock radio gem,” while Guitar World described the latter as a “blend of savage riffing and catchy vocal hooks over a rhythm section of thunderous, headbang-worthy grooves.” Additionally, in just under a month, “Welcome To The Circus,” earned over 4 million streams across platforms. The band tapped their longtime collaborator Kevin Churko (Ozzy Osbourne, Skillet etc.) to produce the band’s ninth and arguably most diverse record.
ABOUT NAVIGATOR GAMES

Founded in 2016, Navigator Games is home to a dynamic and enthusiastic team of video game developers based out of Vancouver, Canada. The studio’s mission is to create truly unique and engaging video games that push the boundaries. This talented team is built upon a wealth of experience accumulated from Activision, EA Games, Ubisoft, Microsoft, Disney, GREE, Radical, Hothead, Acronym, Capcom & IUGO. Its main title, Iron Maiden: Legacy of the Beast , recently celebrated its 6th Anniversary on July 5th, 2022.

ABOUT IRON MAIDEN: LEGACY OF THE BEAST

Iron Maiden: Legacy of the Beast first launched in 2016. Players battle as Eddie, Iron Maiden’s famed undead mascot, in his many forms across amazing worlds inspired by Iron Maiden’s rich imagery and music. Eddie’s quest to gather the pieces of his fragmented soul sees him fighting legions of unrelenting enemies and teaming up with powerful heroes pulled straight from Iron Maiden lore. Iron Maiden is intimately involved in character creation and story content, ensuring everything lives up to the Maiden name and brings their vision to life.

The game also features monthly dungeons and special events where players can participate to earn rare rewards and new characters based on Maiden songs or themes. These have included the demon-infested Infernal Dungeon, Halloween Dungeons such as Dracula’s Castle, and the foreboding Raven’s Altar guarded by the fearsome Raven Witch. November 2020 featured a major event – Limbo of Lost Souls – which launched with Iron Maiden’s latest live album ‘Nights of the Dead “Legacy of the Beast” Live in Mexico City’. The event featured a Dia de Muertos (Day of the Dead) themed dungeon, and introduced Day of the Dead Eddie, a new character ripped right from the album cover!

Five Finger Death Punch’s U.S. Summer Headlining Tour With Megadeth, The HU, and Fire From The Gods Kicks Off in Ridgefield, WA on August 19th