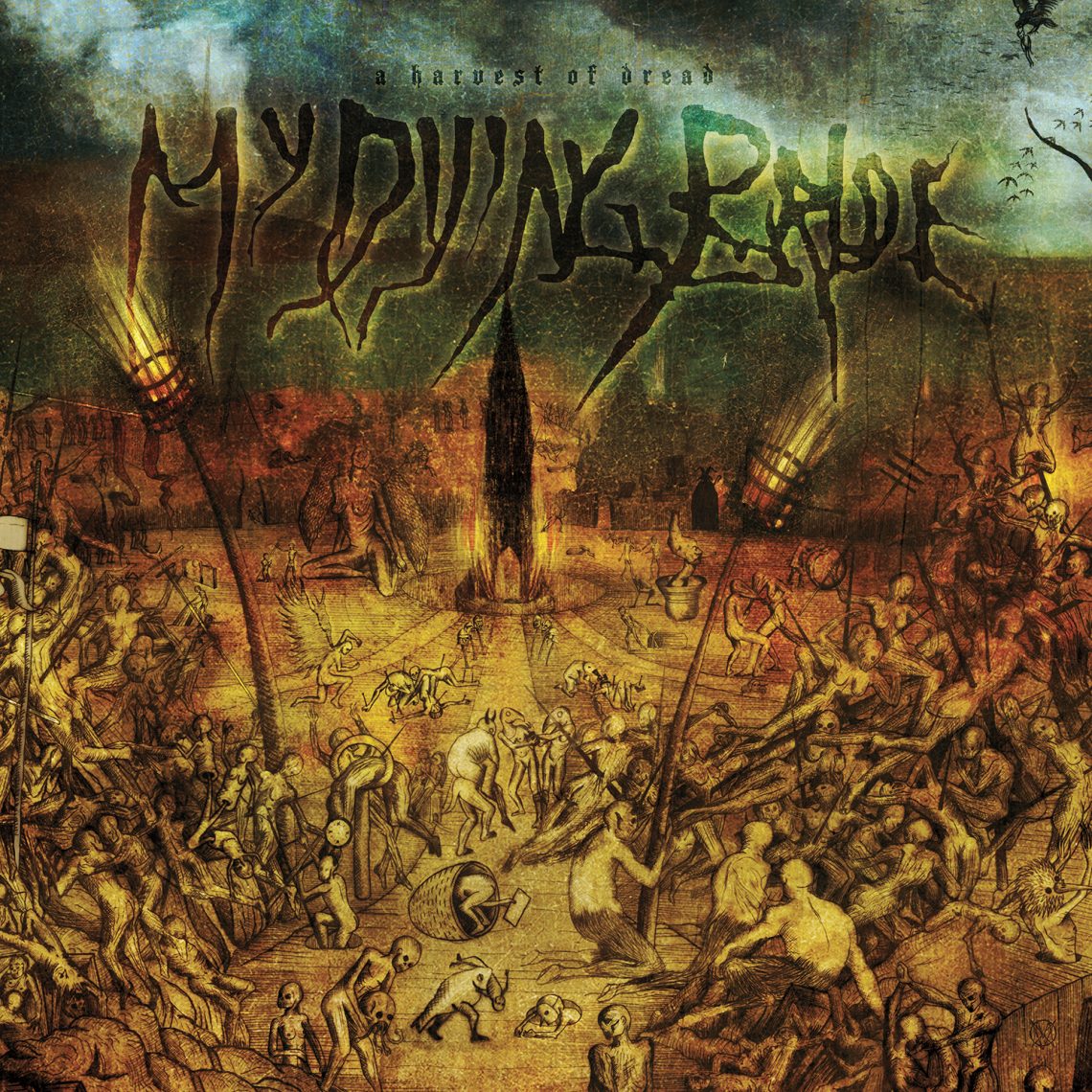 My Dying Bride has been the leading light of doom metal since their debut album “As The Flower Withers” was released on Peaceville Records back in 1992, and the band’s heavy atmospherics and expertly crafted compositions make them among the most essential and legendary acts of the gothic doom/death genre. To celebrate their illustrious 25 year career Peaceville Records will release A Harvest Of Dread on 9th December

‘A Harvest of Dread’ is a limited edition deluxe hard book featuring a 92 page book written by Greg Moffitt chronicling the rise of the long-standing genre leaders from their beginnings in West Yorkshire, UK, through their ascension towards becoming one of the UK’s primary metal forces, along with a look into why & how their creative vision and attitude has been so unwavering over the years. The book features interviews with the band members plus others associated with the scene from the early 1990’s to present day, giving a great insight into the nature of the beast.

“I am astounded at the body of work this outfit has created over quarter of a century but immensely proud too. From humble beginnings of demo tape, draughty rehearsal rooms and transit vans up to the heady heights of digi-packs, hotels and tour buses, we’ve done just about everything a rock n roll band is supposed to do. Members have come and gone, some lost forever and others staying in touch and all, thankfully, still friendly and welcoming. I look back at our extensive career, much of it laid out here for all to see in this impressive collection, and feel strong and thrilled at what our output has achieved. There surely is something for everyone scripted here within A Harvest of Dread as it’s been hand-picked by the band and a select number of friends who know better. And if this isn’t enough, we are working on new material already so that, perhaps in another 25 years, we may be sat here again doing something very similar” comments Aaron Stainthorpe.

This special deluxe book/disc set contains five discs, and an expansive selection of rarities uncovered from the vaults, and presented for the first time. Among these essential historical treasures are pre-production tracks from ‘The Angel & the Dark River’, ‘Like Gods of the Sun’, plus vastly different development versions of tracks which were eventually featured on (or intended for) the ‘34.788%…Complete’ album, showing a much darker, stripped down & metallic edge to the tracks generally.

Also featured on the set is a collection of the early works of the band, including the ‘Towards the Sinister’ demo, plus tracks from My Dying Bride’s rare early 7” releases & EPs, plus a previously unheard live concert from back in 1997.

Joining these rarities are a special selection of catalogue tracks chosen by core members Aaron Stainthorpe and Andrew Craighan, including their own words on why each tracks holds a particular poignancy to them, & the legacy of My Dying Bride.

‘A Harvest of Dread’ also notably features a foreword by the legendary Tom G Warrior of Triptykon/Celtic Frost/Hellhammer fame.

‘A Harvest Of Dread’ is available to pre-order now from https://www.burningshed.com/store/peaceville/collection/246/

Pre-orders for the limited ‘Hollow Cathedra’ etched 7” single are also available from the Peaceville webstore.”Hollow Cathedra” was recorded at the time of the band’s latest opus, ‘Feel the Misery’. The vinyl features the title track on one side, and etched lyrics on the reverse side.

My Dying Bride are to play live on 28th October at the Bram Stoker International Film Festival in Whitby https://www.facebook.com/BSIFF