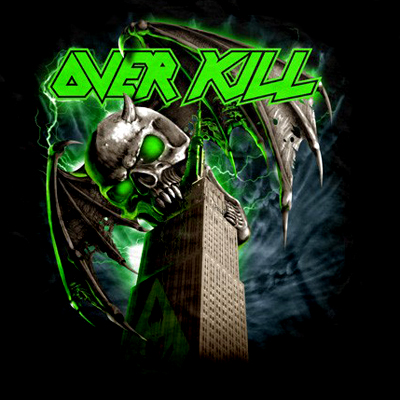 Prior to the show I managed to have a quick sit down with Bobby ‘Blitz’  Ellsworth just to shoot the shit & have a proper face to face catch up. Despite talking only 6 months ago (here), it was nice to sit down with a man I hadn’t seen in person for 25 years. It really was like catching up with an old friend.

Hi Blitz, Great to see you again.
You too. 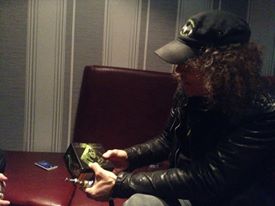 I want to talk to you first about the Historikill box set. Who had final say on the packaging?

That was us. Everything that you see with regards to Overkill comes across my desk or D.Ds. We wanted something simple. We let Nuclear Blast run with it & we adjusted it as we went along. DD & myself manage the band so all these approvals have to come across our desk.  It’s one of the things that I’m most proud of. Not just the box set but we still get to make decisions with regards to this band.
There’s something a little special about this box when you look at the dates (1995-2007) these were the dark days not just for Overkill but for metal in general. A lot of guys did reunions around those days (laughs) &we were pig-headed enough to try & run through brick walls. There’s a beauty in that. We weren’t doing it because it was easy, we were doing this because we enjoy doing it.  So we adjusted along the way & I’m very proud of it.

Who would’ve thought that 30 years on your career would still be going strong.
It’s no longer a career, it’s a lifestyle. It’s funny, My mother named me Bobby, but I’ve been Bobby ‘Blitz’ longer (laughs). But she’s proud of that too. When a person finds their way, years turn into decades & multiple decades. I think there has to be something about the purity & the dignity we’ve kept through it that it didn’t really matter what other people were thinking as long as we were making each other happy along the way.

That’s been the thing with Overkill. There’s never been any bullshit.
We’re in our 50’s & still wont turn down a fight (laughs) Are you fucking kiddin’, it’s hard to keep this reputation just look at the scars on this face (laughs)

There’s a beauty about not giving a shit when you have nothing to lose.  Of course you care about the people who are into what you’re doing. It’s our community & we care about that. Their accolades mean something to us & our accolades mean something to them. There’s a great transference of energy there. It’s more not giving a shit about the industry. We could sit & discuss illegal downloads for 10 years & not really come up with any kind of answer, it is what it is. The community & the industry are 2 separate entities & when you have nothing to lose it makes you kinda dangerous. 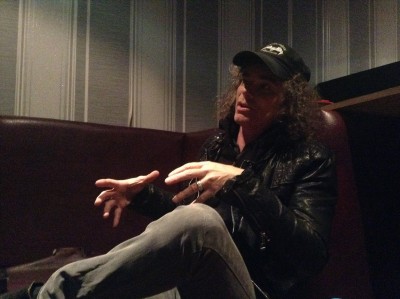 How has the tour been going?
It’s been going well. We have a new drummer with us. Ron (Lipnicki) couldn’t make it out due to family problems, but we have Eddy Garcia from Pissing Razors standing in.He’s actually been with us for over 10 years as Eddy is also our sound guy. So we’ve had a perfect slide in as this guy knows all our material but is also a professional drummer in the same vein.  It’s been a little weird. We’ve done 5 rehearsals & 5 shows & he’s playing like a fucking champ.

I like the feeling of the unknown. It makes it a little dangerous & we’ve taken a chance doing this.

What’s next?
In a few days time we in Oberhausen, Germany to record a DVD where we will play the Feel The Fire & Horroscope albums in their entirity back to back.

What a way to celebrate their anniversaries (Feel the Fire is 30 & Horrorscope is 25)
Yeah, I didn’t have hair on my balls when I recorded both of ’em (laughs) I think I was 12 & 15 or something (laughs)

So Eddy has to learn all this shit right now which is kinda why the set is the way that it is. The set has been going over killer & Eddy has been knocking it out of the park.

& the new album?
Andy Sneap has kindly agreed to produce it. We’ve demoed a few tracks & we’re going to go into the studio with hopes to delivering it around October. But it’s going to sound like us no matter what

Tentative title?
We have one but I don’t want to give anything away just incase it changes & some-one calls me a fuckin liar (laughs)

Fuckin Liar would be a good title for the album. (laughs)
(Laughs) I’m open to ideas.. Throw enough shit & see what sticks (laughs)

Blitz, It’s been an absolute pleasure to see you again & hopefully it wont be another 25 years til we sit down & shoot the shit again.
I hope so too it’s been a good chat. Enjoy the show.