Faces of War is Lancaster based Promethiums 3rd album and it marks the end of a 5 year wait for the follow-up to their 2nd album Origins.


From PTSD, being captured and tortured behind enemy lines to suicide bombers and medieval sword fights, there is no stone unturned by this album. Faces of War is the bands 1st concept album and there’s no subject the band wont tackle.

Full of intricate drum patterns from Kevin Yates, which are echoed by the crunching riffs of Dan Lovett-Horn and Rossi. Thrown into that mix is the thundering bass from Henry Greenwood along with Steve Graham’s vocal that cuts like an angle grinder through stone. This is one hell of an album.

The opening track Enemies Of Fate followed by Declaration show the groove metal side of the band and it’s pretty much what we’ve come to expect of them. But that’s before they completely throw you though the ringer with what comes next.

This album shows how much this band have grown, not only as musicians but songwriters as well. This is showcased really well on the track P.O.W. With it’s almost balladesq intro it smacks you straight in the face with an immense riff before kicking it up a notch into a full on thrasher, reminiscent of classic British thrash acts Re-Animator and Acid Reign. P.O.W segways nicely into Shell Shock which shows a slightly softer side of this band.

20,21,15 features Barry Mills of Massive Wagons sharing vocal duties with Steve. What a fucking combination it is too.

Seeing as this album is concept album, you’d expect a little bit of prog rock to creep in and you’d be right. Turncoat, Stolen Valour and Final Solution have hints of O.S.I and early Jelly Jam time signatures which again shows off their songwriting talents.

The title track brings this 40 minute CD to its untimely close and what a closer it is too. The refrain of Live or Die, Pay The Price with its overlayed vocal is incredible.

Faces Of War is, without a doubt, Promethiums crowning glory. THere are so many ear worms on this record and even after a single play through, I can guarantee you’ll have a few of those moments stuck in your head. (I found myself singing a couple of bars of P.O.W whilst being very Rock n Roll doing the dishes)

This album is that good that even after a few listens, lyrics get stuck in your head too. Now that’s a good sign by anyone’s standards.

Rock is not dead, it’s just hiding in Lancaster under the guise of Promethium. 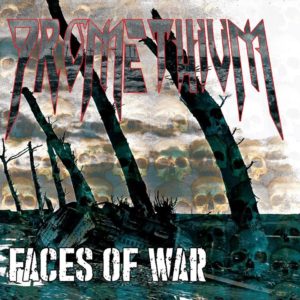