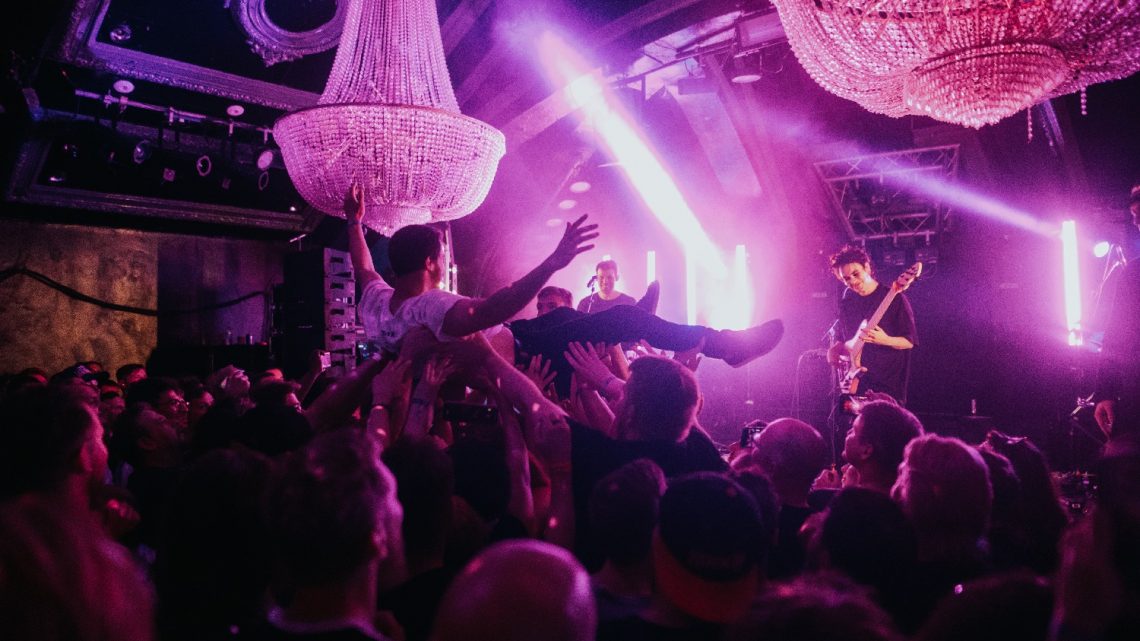 This past weekend I was lucky enough to be at the Radar Festival in Guildford (UK) a 3 day program of bands focusing on Prog. I know what you’re thinking, this is right up your street Owen, I bet you had a great time. And do you know what, you’re right.

I’m sure you’re expecting me to spout magical words about the various headliners, Leprous, Haken and Dirty Loops, but No! I’m not going to do that. In fact, I’m going to do the exact opposite. Those guys don’t need me to blow smoke up their respective behinds so I’m going to focus on some of the smaller, newer bands that I saw and who deserve a write up.

The festival started on…

My Radar Festival started with an interview with Paul and Jozef from Devil Sold His Soul a band described on Wikipedia as ‘Post-Hardcore’ whatever that means. All I know is those guys were super friendly, very open and when they got on stage they were full of energy, but that’s spoilers.

The first band of the entire festival was Wolf Culture, a 4 piece from Bournemouth.

With solid hard rock tunes these guys put in a really enjoyable performance on what maybe the worst slot in music.

Next up I caught 3 piece Last Hyena, a band I knew precious little about but I was glad I stayed around for them as these guys put on a good show. I suppose if I had to pass a comment, and I do cause it’s literally my job, I would use the phrase ‘Avant -Garde’ I enjoyed the style of these guys and I look forward to when they next come to Cardiff and I can get to a show.

One of the bands I was looking forward to seeing were Icarus Dive, I’ve got a couple of songs on my Spotify but I hadn’t seen them live so they were fairly close to the top of my list. And by-eck, I was not disappointed.

If you know their music (and if you don’t why not?) then you’ll already know that they have a lovely sound to them, it’s quiet difficult to put them into a specific genre, so I won’t. All I will say is there is movement in the music which made their set a really enjoyable place to be and when you factor in frontman Joe Crook’s personal energy it was the best place to be on a warm Friday afternoon.

Devil Sold His Soul were next up for me and as I said I’m going to do an entire piece on them in the next couple of weeks so I’ll just say that their set was quality. Paul and Ed on dual vocals you have a lovely mixture of styles, not just screaming for screaming’s sake there is more of a melodic feel whilst still being a heavy band.

Yes I loved both Mike Dawes and Jakub Zytecki, but like I said I wanted to concentrate on some of the smaller acts, so let’s move onto….

Saturday wasn’t going to be my busiest day at the festival. I really only had a few bands I wanted to check out. First up were El Moono and hand on heart, their set was one of the highlights of the entire festival for me. Again, this was the first time I’d ever seen them so when their drummer wandered on stage followed by frontman Zac. I knew I was going to be in for a fun gig. They came across as a band that takes their music seriously, but not necessarily themselves.

The music they played captured me, it is interesting, recognizable but different. I was lucky enough to catch up with Zac and Jamie later in the day in the press area and we spent 25minutes talking about everything under the sun from the Brecon Beacons, through politics to dark matter. I’ll be posting this shortly as well, so stay tuned for that. My overall impression was of a band that is capable of doing something unique. I thoroughly recommend you check these guys out.

I’ve been listening to Temple Corrupted on rotation since I got home. That says a lot.

I then wandered down to the second stage to catch You Win Again Gravity a quintet who play a sort of post-hardcore version of rock. Really good energy and rapport with the crowd the occasional growl added to the music. Again a really enjoyable show.

Sunday for me kicked off with an interview with the awesome Hawxx, yes, yes, yes I’ll be posting it in due course. It was a great pleasure to meet Anna, Hannah, Jessica and Julia only the night before I had donated to their GoFundMe appeal to try and raise enough funds to release an album. Here is the link in case you want to be awesome and donate some of your cash to a worthy cause. I’ll talk about their set shortly.

The first band I saw on Sunday were Bristolians Phoxjaw and what a band they are. Again, like many of the bands I’m mentioning, you need to check them out. It doesn’t matter if you like thrashy stuff, prog stuff, if you want to stare at the floor or dance or try and work out time signatures, this band seems to cover it all. After the set I was sitting in the press room talking to my new friend Simon Clark and in trying to describe them I said a line that I’ve never said before. “They are like some sort of eclectic chimera of music”. The set itself was superb, full of energy with the band going through their repertoire of uniqueness.

Then it was time for my band of the day Hawxx. On the second stage there was no room to move as everyone seemed to want to see the quartet do their thing. Sadly, as good as the set was (and it was really good) they were let down by “technical issues” which meant the sound quality just didn’t do them justice.

However, despite the issues with the audio, I was blown away by the band. Hannah has vibes of Nita Strauss, Anna is a great vocalist and has a major vibe with the audience, Jessica is a drummer of rare quality (those drum fills…. Wow) and new bassist Julia, despite still finding her feet, has a lovey big sound that works very well. I’m more convinced than ever that Hawxx have all the makings of “it”.

Later in the day I took myself down to see Port Noir who impressed me with a different sound, a lot more electronic than a lot of the bands at the festival. Whilst I didn’t catch their entire set, what I heard has interested me and give a fair wind, I’ll see them again sometime soon.

The final band I want to mention are Poly Math. I was recommended this band by the aforementioned Simon, by this time I was seriously flagging so I wasn’t sure about going to see them, however, when someone makes a serious recommendation I take note. And I’m glad I did.

This quintet were about as eclectic as it got this entire weekend. The music is dense and intricate but fun and listenable too all at the same time. The majority of acts over the 3 days were heavier and so having a band with a dedicated keyboardist and a saxophonist were welcomed.

Radar Festival was an enjoyable weekend, there were some issues with the sound quality, the lighting wasn’t good as a photographer and having a single set of stairs to move between the two stages was a pain. However, next years festival is moving to Manchester to a much bigger venue so I’m looking forward to heading up there for next years festival already.

Don’t forget folks. Big bands were small bands once. And they only become “big” through people taking a chance and giving them a listen.

So check out everyone above and give them some love.

Tell them All About The Rock sent you.