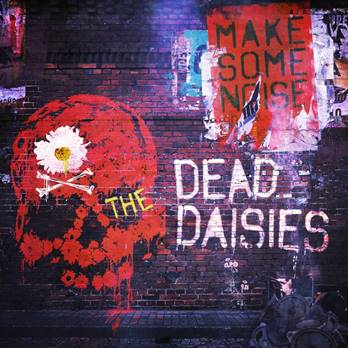 The Dead Daisies’ superlative new studio album ‘Make Some Noise’, set for release on Spitfire / SPV Records on August 5th, is a vital, vibrant and utterly uplifting opus, which way more than lives up to the legendary ‘classic third LP syndrome’ epithet.

‘Make Some Noise’, packed with huge hooks, giant, intense guitar riffs and glorious, distinctive vocals, celebrates the kind of classic rock ‘n’ roll that has gone from strength to strength ever since it emerged in the early 1970’s and that sweaty clubs, concert halls and stadiums the world over would be impossible to imagine without. Each of the joyously performed, perfectly crafted, melody drenched 12 songs instinctively aims straight for the centre of the listener’s autonomic nervous system, totally enveloping the heart and soul and compelling them to move to the irresistible rhythm.

“There are lots of very good reasons why this kind of rock ‘n’ roll has never gone out of fashion,” band members David Lowy (Red Phoenix, Mink), John Corabi (Mötley Crüe, Ratt), Doug Aldrich (Whitesnake, Dio), Marco Mendoza (Whitesnake, Thin Lizzy) and Brian Tichy (Ozzy Osbourne, Foreigner) all agree; “Our songs are simply timeless, immortal, classic! That’s why working with The Dead Daisies is so much fun, and that’s why the reaction is always phenomenal, no matter when and where this band turns up.”

“I’m very pleased with ‘Make Some Noise’,” says Aldrich. “It was a very productive time spent in Nashville and New York! The record is a straight up rock n’ roll record. Very raw and punchy. We didn’t do lots of overdubbing of the guitars which I loved…it’s really got a good vibe like the days we spent writing and recording. I think it is a cool record that adds to an already cool catalogue they the band had prior. The best part is the guys are all friends and very cool to be working together again!”

The Dead Daisies were formed by guitarist and songwriter David Lowy, whose keen instinct and clear vision has guided the recruitment of an amazing revolving line-up of renowned musicians since the band’s inception in 2012. Initially, Richard Fortus and Dizzy Reed of Guns ‘N’ Roses, plus Rolling Stones band members Darryl Jones and Bernard Fowler, as well as John Tempesta and Charley Drayton of the Cult were involved. Lowy has once again enlisted incredibly talented international stars to record ‘Make Some Noise’. “For me as a vocalist, this kind of high caliber line-up is an absolute dream come true” enthuses John Corabi, continuing “When you work with The Dead Daises, everybody is amazingly motivated to deliver top performances”.

From blazing opener ‘Long Way To Go’ (the first single and soon-to-be crowd favourite) onwards, this album rocks hard right through to the very last note. Cross references from legendary bands from the past feature just as much as highly contemporary sounds and trendsetting directives. Compositions such as ‘Mainline’ and ‘Last Time I Saw The Sun’ bring to mind the likes of Aerosmith and Mr. Big, while ‘Song And A Prayer’, with its fluid guitar licks and anthemic chorus, is mightily reminiscent of Guns ‘N’ Roses.  ‘Make Some Noise’, the title track itself, is nothing less than a self-confident, tongue-in-cheek rousing rock statement, bound to be chanted over and over by euphoric audiences at this consummate combo’s electrifying live gigs.

‘Make Some Noise’, which was superbly recorded and produced by Marti Frederiksen (Aerosmith, Def Leppard, Mötley Crüe, Buckcherry) in Nashville in February and March 2016, contains ten originals plus two inspired new incarnations of The Who’s ‘Join Together’ and Creedence Clearwater Revival’s ‘Fortunate Son’.

The Dead Daisies, a must-see live act who have already toured with the likes of KISS, ZZ Top, Aerosmith, Bad Company, Lynyrd Skynyrd and Def Leppard, among others, have lined up a UK and Irish tour in July in support of ‘Make Some Noise’. Don’t miss the chance to catch the biggest new name in Rock at the following gigs and festivals:-

David Lowy aptly concludes that “The Dead Daisies mean pure fun to me. This band is first and foremost about our passion for this kind of music and about celebrating classic rock’n’roll. Because one thing is clear: if we have fun in the studio and live on stage, that spark is bound to ignite our audience.”