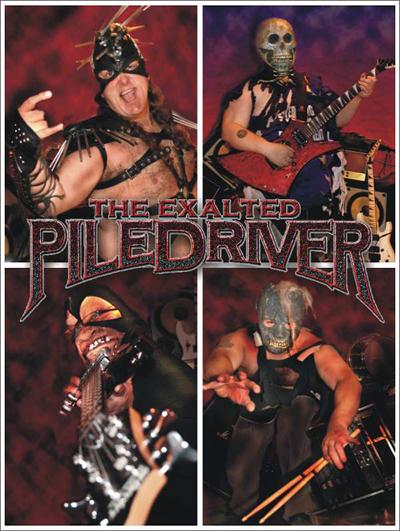 As part of the ongoing Thrash Under Pressure I asked colleagues at All About The Rock Towers for bands that should be included. Several of the suggestions I was given led me to listen to bands I’d almost forgotten about and in some cases to check out bands I’d never heard of before.

Piledriver fit into the latter category. In my defence, during the earlier days of thrash there was no internet (imagine that) and bands were discovered by word of mouth. I just didn’t hear the right words from the right mouths I guess.

Anyway Piledriver was formed in Canada in 1984. The emphasis was most definitely on being over the top and flamboyant. In fact google a picture of the band if you dare and the images you end up with look like they come from an incredibly specialist under the counter publication, if you know what I mean.

They released Metal Inquisition in 1984. The first impression is that it is metal as fuck, but it’s perhaps trying too hard to be metal as fuck. The title track opens with a blistering riff, but leather and chains references (maybe they actually were involved in specialist porn?) and use of the word metal around 50 times throughout the song suggest they could be a parody. No, not at all. That’s just how they were. Think WASP, but way heavier. They proved they weren’t to be taken seriously with song titles such as Sex with Satan, Sodomize the Dead and Alien Rape, but musically it’s not bad. Granted, it’s no Kill ’em All, but it was a reasonably solid debut. Disappointing that they didn’t use a real drummer, but sometimes you just can’t get the staff. In fact only two people were involved in the recording at all.

Stay Ugly followed in 1986. Now Piledriver were a proper band with individual musicians and it showed. Right from the off this is a much better album. The songs are better, the musicianship is better and it’s as if they’d listened to other thrash bands and learned a thing or two.

These first two albums have sold around 500,000 copies worldwide to date.

Then all of a sudden Piledriver vanished. They would resurface almost 20 years later in 2005 as The Exalted Piledriver. This is because the name Piledriver had been taken over by a Danish Status Quo tribute act in the meantime (you couldn’t make it up!).

In 2008 the new look band released Metal Manifesto. Now we were talking. Clearly money had been spent on production and the sound was way heavier and more polished than on the band’s albums from their first incarnation. Blood Bath especially is a triumph with an amazing riff that I’m sure some of the Big 4 might look at with jealous eyes. But this album is no one hit wonder and the whole thing is really a masterpiece. The title track, Volatile and Battle Axe all deserve honourable mentions. As does the Machine Head-esque The Things I Give even if the lyrics are a bit daft.

A great deal of festival shows followed and a live album was released with possibly the greatest title of all time: Night of the Unpolished Turd. Live albums are often a cop-out or cash-in for bands who haven’t released anything for a while, but not this. It has the benefit of showing how some of the songs from the first two albums should really have sounded. And it is possibly the band’s way of bowing out for good. Who knows?

Put them on your playlist: Alien Rape, Flowers of Evil, Blood Bath