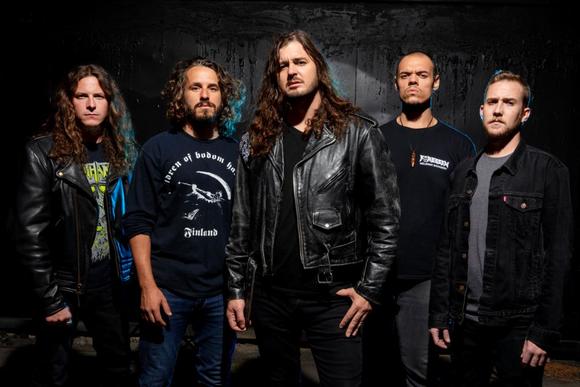 SoCal thrash metal force WARBRINGER will release their highly anticipated full-length follow up to 2017’s acclaimed Woe To The Vanquished, entitled Weapons of Tomorrow, on April 24 via Napalm Records. Today, the band has unleashed a new video for the grandiose album closer track “Glorious End”, which in theme with the album’s concept, presents itself as a war epic narrated by an exchange between two close heroes – father and son.

Check out the brand new video below, and witness the somber tale and splendiferous sound of “Glorious End”.

WARBRINGER vocalist John Kevill says:
“‘Glorious End’ is the grand finale of Weapons of Tomorrow, and a first-person narrative war epic. The verse is done as a father-son dialogue, in which the son promises the father that he will live up to his ancestor’s legacy of courage, honor, and duty. The song and title have a cruel twist of irony, as the protagonist’s bravery is rendered useless by the horrific new weapons of his time, and he questions the virtues of his father as he dies.
This kind of narrative storytelling element is something we feel is pretty unique to WARBRINGER among thrash metal bands. The music is hard-charging and aggressive, but also somber, grandiose, and well, glorious. The epic side of WARBRINGER is something we haven’t shared in a single yet, and we thought it was long overdue. Now onwards, brave sons.” 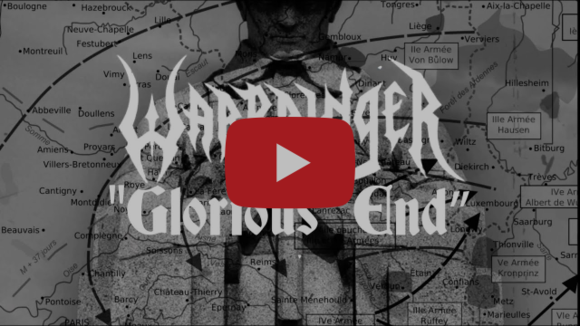 With Weapons of Tomorrow, WARBRINGER have not only proven a true mastery of their craft, but have spurred the forward shift of an entire genre – transporting thrash metal into a brand-new era. Building upon their internationally-acclaimed blistering attack, Weapons of Tomorrow showcases a refreshed technical approach and a heightened focus on unique lyrical and vocal style. The record takes the promise of the band’s previous release, Woe to the Vanquished, and carries it onward, presenting WARBRINGER at their absolute best to date – over 10 years into their careers. 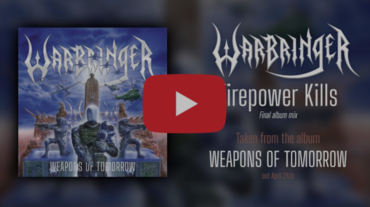 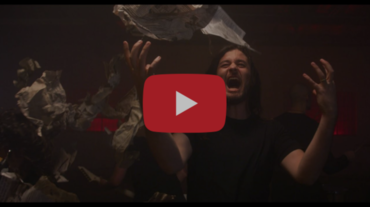 Weapons of Tomorrow was recorded with acclaimed producer Mike Plotnikoff – producer on Woe To The Vanquished and for artists such as In Flames and Fear Factory – and mixed by Zack Ohren, who is credited for the mix on WARBRINGER’s sophomore album, Waking Into Nightmares, as well as his work with artists like Machine Head and Immolation.

Weapons of Tomorrow contains a variety of themes, presenting a self-contained concept with each track, but ultimately focuses on the over-arching notion of modern technology endangering society rather than advancing it.

John Kevill says about the lyrical content of Weapons of Tomorrow: “I put a lot of thought and detail into the lyrical content of this album. There’s often a ‘storytelling’ component, in which the song’s lyrics develop or turn along with the music and structure of the song. All in all, Weapons of Tomorrow contains elements of our previous album, Woe to the Vanquished, but takes them further and in new and exciting directions.” 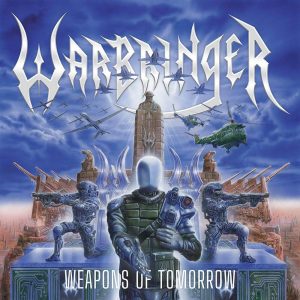 WARBRINGER have just announced upcoming EU/UK tour dates supporting headliners Destruction, set to kick off on November 28, 2020 in Belgium! Additional support will come from Crisix and Domination Inc. See below for all currently confirmed tour dates.

Formed in late 2004, WARBRINGER has gone on to be one of the most consistent and well-regarded thrash metal bands of the new generation. After releasing two demos, the band broke out with their 2008 debut, War Without End – a record illustrating a frantic energy and aggression which had been absent from metal for some time. The band continued to redefine their sound on each of their next four career-defining albums – 2009’s Waking Into Nightmares, 2011’s Worlds Torn Asunder, 2013’s Empires Collapseand 2017’s Woe To The Vanquished, their first via Napalm Records (Billboard – #8 New Artist Albums, #17 Hard Music Albums, #26 Current Rock and #29 Independent Current Albums). WARBRINGER has bolstered their performance roster by relentlessly touring internationally throughout five continents with iconic artists such as Megadeth, Exodus, Arch Enemy, Napalm Death, Iced Earth, Nile, Suffocation, Kreator, Soilwork, Overkill and many more, and found themselves working with industry greats on each new album – creating with producers such as Steve Evetts (Symphony X, DevilDriver, The Dillinger Escape Plan), Bill Metoyer (Slayer, D.R.I., Dark Angel), thrash legend Gary Holt (guitarist, Slayer/Exodus) and beyond. The ever-evolving quintet continues to renovate their potent concept with each passing year, without ever losing focus on the future. Metal Injectionsaid it best, “…the almighty WARBRINGER have proven that they reign eternal… no matter what the circumstances.”

With one listen it’s clear, WARBRINGER has continued to move forward in their own unique direction, and Weapons of Tomorrow is pure 21st century, state-of-the-art thrash like never heard before.