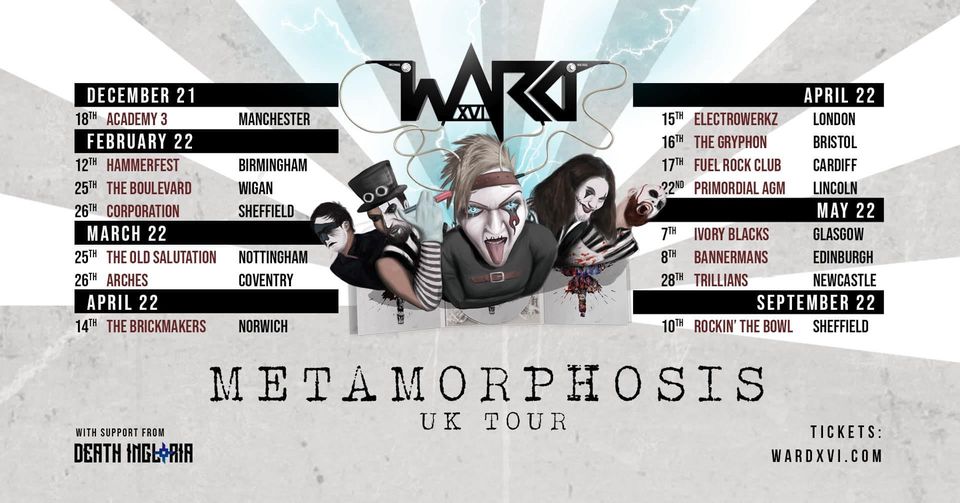 Following an interesting asylum escape followed by 2 years being holed up, the inmates of Ward XVI finally make it into Scotland and the capital.

They found refuge in Bannermans and Psychoberrie poured out her story of Metamorphosis.

Her story in incredibly dark and recounted so beautifully, appearances of her abusive mother, appear to manifest along with the monsters from under her childhood bed and the shadow figure in her cell who helps shake off the straight jacket restraints.

Her mother certainly made her presence known, materialising in the audience as a vodka swilling giant. The strange creature from under the bed (the Babadook) lurched around the crowd, it’s red eyes glowing as it taunted and stalked it’s next victim.

Ward XVI know exactly how to put on a rock n roll show. When you pay your money for the ticket (tonight was only £8) you’re not watching a band, you’re experiencing an event.

What was refreshing about watching the show, due to the amount of theatrics very few (if any) were watching the gig through their phone. Pictures where taken of course but almost everyone was caught up in dramatization (including myself and my colleague we had swallowed the kool aid and were firmly swept away on the tide of madness).

On record, Metamorphosis is masterpiece. Live, it’s a stunning work of art. Ward XVI have achieved with their stage show what very few bands have been able to do. They’ve got the balance of theatrics and musicians correct. One does not overpower or detract from the other.

My colleague and I walked out of the show last night with our heads and minds blown. Ward XVI have an amazing production that not just works on stages such as the S.O.P.H.I.E stage at Bloodstock but also works in club venues. Their show is outrageous, gory, scary and fascinating.

If Ward XVI escape the asylum again and end up in your town, check them out, I know I will.

Death Ingloria and Splintered Halo who were the 2 support acts both played great sets and James MacDonald who was in charge of the front of house sound made each band sound fabulous.

Motor Sister – Get Off – CD Review