German guitar maestro AXEL RUDI PELL and his band will be releasing their 17th studio album on 23rd March via SPV/Steamhammer. Yes the opening statement is correct, 17th studio album, not one to rest on their laurels they have been churning out an album every 2 years since 1989!

AXEL RUDI PELL is a rock, power metal institute that you can always turn to for some no-nonsense heavy rock. Some will disregard this approach, but the large AXEL RUDI PELL fan base will disagree. So if you don’t like RAINBOW, DIO, DEEP PURPLE, URIAH HEEP, RUSH and all the bands in that ilk then you might as well just stop reading the review as “Knights Call” isn’t going to appeal to you…it’s that simple!

The album opens up with ‘The Medieval Overture (Intro)’ which sets the grandiloquent celebration of the rocking to come. The album then opens with ‘The Wild and the Young’ which is driven by the howling riff and the sing-along melodic chorus and ARP gets to show case his dextrous guitar skills with the solo. The follow-up track ‘Wildest Dreams’ then incorporates the keyboard more to add another layer of sound to the song, the first two tracks are the strongest on the album. However that doesn’t mean the album isn’t that less enjoyable.

We have the obligatory ballad in the form of ‘Beyond The Light’ which will have you tearfully singing along, then there are the cliché songs ‘Slaves On The Run’ and ‘Long Live Rock’. Although there is nothing terrible about these two songs they are just a little to formulaic, but they do serve the purpose of you having you nodding along and belting out the chorus (probably out of tune like me!). The first of the two epic tracks (songs over 7 minutes) is ‘The Crusaders of Doom’ which is a mid tempo rock anthem with a cracking solo from ARP, the 2nd epic track is the album closer ‘Tower of Babylon’ which incorporates a middle eastern theme to the mix. ‘Follow The Sun’ works on a solid groove laden riff which sinks it’s hooks into you and have you banging your fist along. The final song to mention is the instrumental track ‘Truth and Lies’ lets the secondary players (will come back to that phrase later on) shine with some effective rhythm playing and captivating keyboard player adding an extra layer to the song.

I said I would come back to the phrase, secondary players, and I have. I don’t mean that in a derogatory term, but on a guitarist solo album the main players are the guitarist and the vocalist. Everyone is very competent and add to the sound, however the main star is ARP who lets his fingers do the work with the dexterous, ambitious fret work and solos. We also have to commend vocalist Johnny Gioeli for his powerful gravel voice that washes over the music and is a huge asset to the band. AXEL RUDI PELL isn’t reinventing or adding anything new to his sound, however he clearly has a huge passion for this type of music and knows what he and his fans like aims to please!

You could argue that you could pick up any AXEL RUDI PELL album and it sounds exactly like the last, although this maybe true, I haven’t picked up a AXEL RUDI PELL album for 15+ years so this is a refreshing change. Maybe if I reviewed the new album in two years time I might have a different view and be highly critical. However for the time being this album has a ‘moth to the flame’ effect and has you coming back over and over again and you know it isn’t a classic album, it’s just comforting and like reminiscing with a friend you haven’t seen for a while! 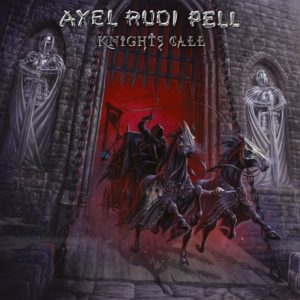