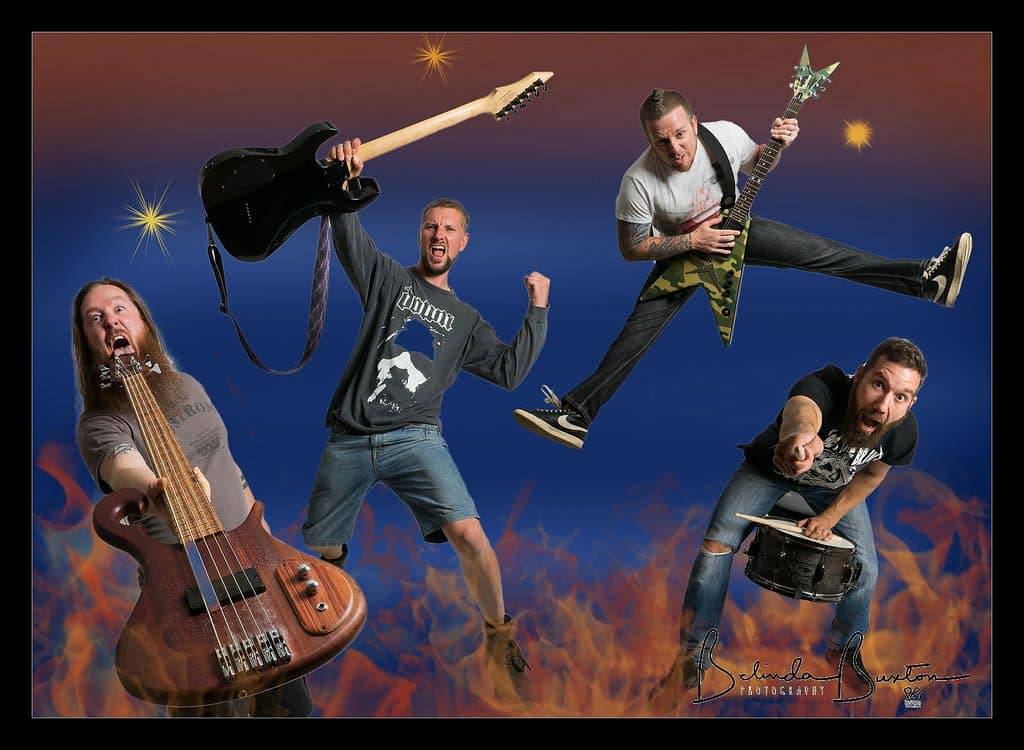 This heavy metal bands Bassist from Norwich UK has revealed in this intense interview that the band are planning to unleash an almighty album full of chunky riffs, and a power train of melodies upon the world.

Expect to get a full assault on your ears which will infect your senses like a powerful drug which you won’t be able to get enough of.

With their distinct sound these underdogs are making waves upon the music industry, definitely a band worth watching out for!

We see you guys have been busy with the likes of Adrenaline Rock Festival and Brickfest both in Norwich, how are you finding it being out on the road?

We’re loving it! Getting out and playing shows is what we’re really about as a band, local shows like Brickfest and Adrenaline are nice and comfortable for us, and it’s nice to get feedback from people who’ve seen us before but there’s an element of excitement that comes from playing new venues. Just finding the venue, walking into the room for the first time, the anticipation of it all just adds to the buzz.

You guys have got a great gig lined up on October 12th at B2 in Norwich supporting Chasing Dragons, what can your fans expect at this event?

Riffs! That’s what we do! There’s a new song that we’ve only played live a couple of times so far, so they’ll have that to listen out for if they’ve not caught us a show in a while.

You guys announced back in April that you were recording an album, is the album done now and if so how did you find the recording process?

Yeah, it’s all recorded now, we’re just finalizing how we’re going to present it in a physical form and how we’re going to re-produce it – most likely DIY, the same as recording it. It was quite a drawn out and disjointed process this time around, but that worked well as it meant we could afford to be a bit more laid back about it which suits us. Gareth (our guitarist) basically figured out the technical side of it as we went and he did all the recording, engineering and editing himself with us just sticking our oars in for our own parts. He struck a deal with Justin at NRSIX studios to help with the mix, but apart from that I think it’s all been done in-house.

Literally, in our houses. We can’t afford to book a studio and pay an engineer until we’re totally happy with it, so having no restrictions on how long we took was quite liberating compared to previous recordings. It’s not that we don’t enjoy studio time, but this way we didn’t have to rush or make compromises in the same way. Gareth’s been an absolute legend putting up with all the requests for “little edits” which involve far more work than the rest of us realise.

Your 360 video is cool how did that come about and who came up with the idea?

That was another of Gareth’s projects, again completely DIY and pretty much entirely down to his hard work. He’s a film maker as well as our guitarist, so we got lucky there!

How does playing smaller festivals compare to playing larger festivals such as Bloodstock which you guys played back in 2015?

Smaller festivals feel a bit more personal as you don’t just get lost into the crowd when you’re not onstage, if someone wants to find us and talk to us they usually can – there’s not often a backstage area so once we’re off stage we’re just there with everyone else. Bloodstock was an awesome experience for us though, the New Blood Stage which we played on is really organised which took away a lot of the rushing around setting up and clearing off stage. Usually we finish setting up and it’s time to start playing, so having a stage team to help us and getting to walk on a kick straight in was real treat.

How do you prepare yourself before a show?

We don’t have a routine really, we used to have a bit of a ritual with cheap energy drinks but that often gets forgotten these days. Mostly it’s just making sure we’ve got everything we need ready to go and knowing what the first song on the setlist is, having a crowd in front of us gets the energy going and does the rest.

Where can your fans find your music?

We’ve got a couple of music videos and a few live videos on YouTube, our old EP is on I-Tunes and SoundCloud but we’ll be looking to get the new album out on a few more platforms when we release it. Other than that we’ll be selling CDs at gigs and possibly through an online store, once we’ve figured out the details we’ll make announcements on our Facebook page.

How do you feel you have developed as a band since you first started out?

We’re still just a bunch of guys who want to play our songs as loud as the venues will let us, we don’t like to take ourselves too seriously but since we started we’ve made efforts to put of a more coherent live show and present ourselves a bit more professionally. Musically our newer material is a little less simple, it’s by no means “technical” but we like to experiment a little more than when we were finding our feet as a band.

More new material and more gigs with any luck! And maybe another video or two….. Now that the album is finished we want to get out on the road a bit more and play some new venues, we’re always on the lookout for opportunities to reach new audiences.

Thankyou for your time!