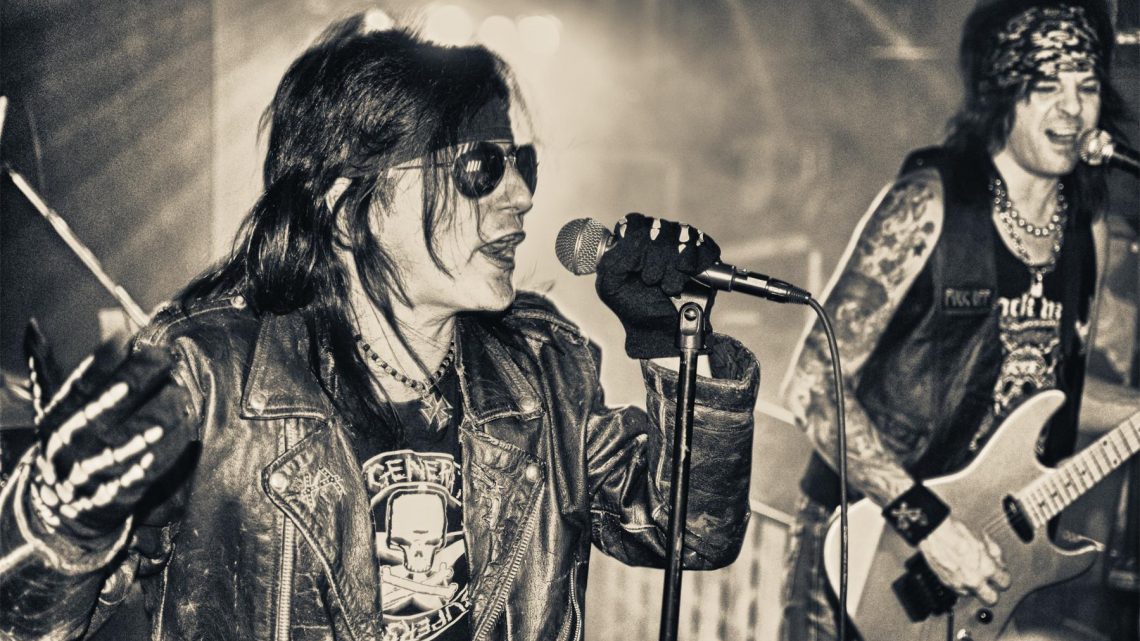 Phil Lewis has had a wild career and is best known as the vocalist of Californian Hard Rockers L.A. GUNS. It turns out his home life gets pretty wild as well, he made some time for us to give a different kind of interview. 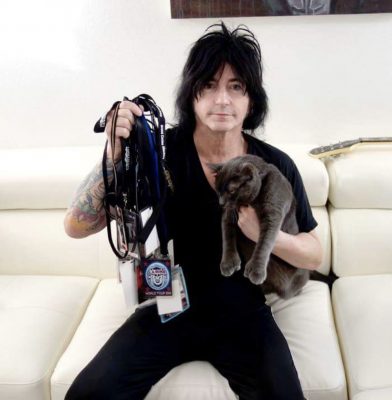 Hey Phil, I feel like you have some felines to tell us about?

I have to be very careful right now. I’m being looked at very closely and suspect my thoughts could be invaded. They can do that, can’t they? Cats. Living sculpture, born blind. Mind readers? Perhaps.

Well, I truly believe they are capable of anything. Watch your back there Phil, how many cats do you have glaring at you?

Where did you find these two?

I fostered them from Kitten Rescue in Los Angeles and ended up marrying the girl who adopted them, so I’ve had them since they were three months old. Tiny, sweet faced, silent-meowing little aristocats in a room full of countless mongrels and moggies. They both got big quickly and were inseparable.

Well that is an adorable love story if I’ve ever heard one. It must be nice to have so much life around your home, do they all have different personalities?

Dusty loves to eat. He can go from a virtual coma to begging like a terrier at the mere crack of the fridge door – licking his lips as if to say, “Look! I’m hungry, Phil. What’s that you’re eating?” Kitchen cat. Cat at a restaurant on holiday. Eat out of your hand cat. I confess I may have created a monster, but as long as he’s keeping a steady weight, then my purpose in life is fulfilled, and his voracious appetite is almost satisfied. He’s a one man cat, and I’m his man. That can be a fulltime job, but the arrangement seems to be working. I love him. 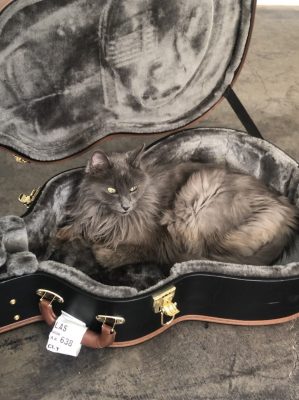 Dusty packing himself for tour

Delilah, however, wants little to do with the boys in the castle. Look up “bitch face” and you’ll get her portrait- condescending, pissy, and ladylike. She’s very pretty and knows it. Doesn’t like to play rough but loves to be chased if she’s feeling saucy. Unlike the Kitchen Cat, her love can’t be bought with tasty morsels. Yet despite her aloof demeanour, she’s the first to welcome strangers into the house and shower them with affection for as long as they’re willing to tolerate it. Her greatest joys in life are a nap and a cuddle, just don’t mess up her hair.

And then there’s Tommy the tenant. Five-year-old cannon ball. We adopted him after my crash-landed canary died. It wasn’t really my bird, just a wayward fowl that ended up in our yard. After the appropriate burial ceremony, I started thinking about getting a new member of the family.

When we got there, I was a little disappointed there weren’t any kittens for adoption, but there was a handsome two-year-old silver blue charmer that was going bonkers for a feather.

We were powerless to resist.

Wow, they all sound like amazing cat children, what was it like bringing Tommy home to the other kitties? 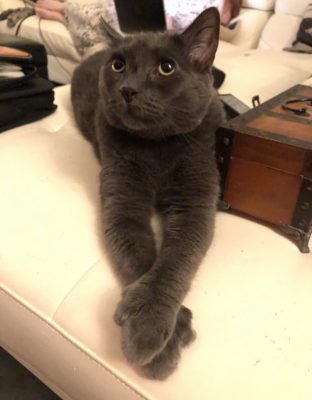 Bringing Tom home was a challenge. The kittens had forgotten other felines existed and were not thrilled when the big caged boy was presented for inspection. Fortunately, it didn’t take long.

He was charming and won us all over within the week.

He’s a gentleman in every sense of the word. So polite that he still refuses to eat until the kittens have chosen the two best bowls, by whatever standards cats use to decide such things. When we play, he occasionally gets a little spicy, and it soon becomes apparent that – were he hostile – the flesh on my hand would be skill fully peeled in very short order. He’s a miniature steel panther. My pretty cannon ball!

Honestly Tommy sounds like a legend, do you ever take them outside and show them off around the neighbourhood?

My cats are strictly indoors. I believe cats, like dogs and all pets, should reside under our protection.

Very good point, the outside world can be dangerous. Do they have any weird quirks inside the house?

Weird things? Not much. Tommy does that water dance with his front paws while drinking. He also doesn’t like treats, but I’ve got him eating breakfast with the kittens out of a can – even if he only politely licks the gravy. Dusty sleeps on his back, often with his eyes open.

He sleeps with his eyes open? Cats can be really creepy, cute… but creepy. Can your cats do any tricks? 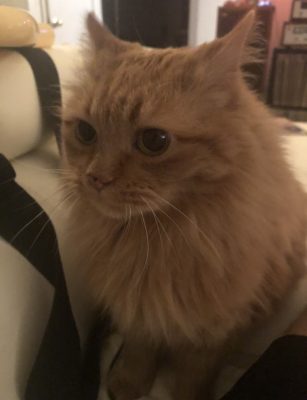 teaching you to fetch instead. But there’s plenty of other things he can do. Slicing house blinds like an expert, for example. Every window has a cat-sized observation hole so Mr. Nosy can get a 360 degree view at any time.

Delilah only knows one trick and unfortunately it’s standing on her hind legs to do a little dance for anyone sitting on the toilet. It’s very cute, but that’s the only place she’ll perform it, so a bit difficult to show off her talents.

I could wax poetically about Dusty’s amazing feats in the Cat Circus, but we have yet to progress beyond leaping 3 feet between bar stools. He’s working on it.

Wow! These are some seriously talented cats you have. You’ve no doubt been spending a lot of extra time at home, due to Covid, have they been comforting at home or more of a hindrance?

During the pandemic I’ve been doing more home recording than I’ve ever done in my career, and that included sound proofing with heavy baffles and blankets. The cats do a fantastic job supervising – disappearing and suddenly reappearing right under my feet.

I’ve had a few slightly embarrassing moments on Zoom sessions thanks to their intrusions. They sleep for hours but somehow know the instant you sit down to do something important. It’s difficult using a keyboard when a 20 pounder is laying across it like a prince. Which would be fine most of the time, but when I have my producer or band member on a call, and they have to watch me untangle him while trying (and failing) to look professional. . . Fortunately, my guys are all cat lovers themselves and get a good laugh out of my hopeless struggles.

Now that is the kind of Zoom call entertainment we like. How are they when you practise at home?

My cats love music. If I’m playing guitar or working out a song on piano, I invariably have all three very close by, and I’d like to think that’s a compliment.

Who looks after them when you’re not home?

It’s been nice getting even closer than usual due to being home for such long stretches, but normally we can leave them with a full auto feeder and lots of water, and they’re happy to amuse each other for weekends or short vacations. Of course, I have cameras spying on them the whole time and a good support system when we’re away in the rare case of an emergency.

I bet they love it when you arrive back home. 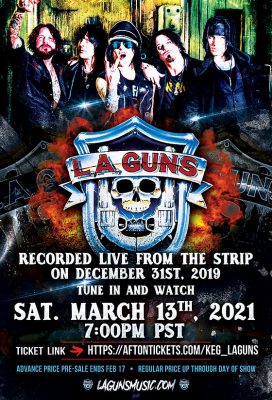 Funny thing is, when I get back home, unlike a dog that would go bonkers, they’re just like “Oh. Hello, Phil. Pop a can?” Cats are the most practical companions for musicians, certainly in my case.

Well, atleast they show their love in their own way. Do you ever put them into any costumes?

Some people love to dress up their felines, and some cats seem to enjoy or at least tolerate it. Mine are not amused and want no part of it.

They all have orange collars (the color of American prison uniforms) to perhaps let people know they’re indoor cats if they do manage a jailbreak. Microchips, bells, and tags too, of course, on simple breakaway collars – except Tom who will tolerate a dashing bow tie.

Phil, I love how much you love your cats, so thanks for taking the time to share this part of your world with us. Do you have any words of wisdom to share with your supporters?

I cannot recommend cats highly enough. They’re fun, bring you luck, and truly love you if you get the right one (although they’ll make you earn that love). Kittens are cute and everybody wants one, but keep an eye out for adult cats.

They make great adoptions, have unique personalities, and will be forever grateful.

Well, you heard the man, adopt a cat!

L.A. GUNS recorded live on New Years Eve 2019 at the Sunset strip screens on March 31st 2021. Get your tickets HERE