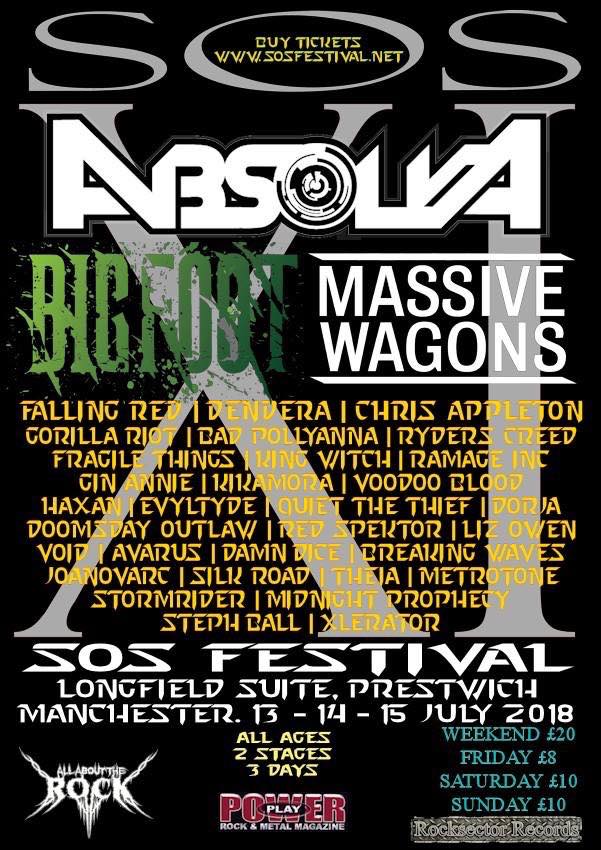 The fans trickle in from their restful evening and energetic end to day 1 where Bigfoot pulled out all the stops to entertain and give the SOS fest goers something special and memorable with their seven special guest singers. There are children dotted all over the place and for good reason, as the KIDZ were going to be playing; you’ll see soon enough.

Opening the day, Red Spektor(7) brought us their psychedelic stoner blues rock to the fore; the low ebb drifted down the slowly gathering crowd, hypnotising the gathering make them drift into a dark, relaxing abyss of melancholy and great chords. Having said that, the low tones and heavy loose stringed bass lines showed that stoner rock has its place but opening a rock festival that needs that higher tempo to pick the crowd up, not so much. Never has something so small got a bunch of men going goo-goo over them since the launch of shaving foam in a can, but these three little dynamites show that the KIDZ(8) are alright. It goes to show that metal and rock is in good hands with the next generation already showing their colours with some classic and obscure covers of the greats of yesteryear.Joan of Arc(7) showed us that four “real” women and not some manufactured supermodel group can provide us with some great old rock ‘n’ roll with influences from Joan and the Jets and the likes. Joan of Arc gave us some much-needed high tempo riffs and solos to make any grown man blush; their stage presence lit up the muggy, sleepy room as the trio of guitarists shared the spot light as vocal lead and backing vocals. This was just great rock music to dance to and the cover of The Cranberries ‘Zombie’ in honour of singer Dolores O’Riordan, who sadly passed away at the beginning of the year, was a real highlight, beautifully rendered in all its glory.

Bringing down the tempo with their acoustic harmonies, MetroTone(6) gave us such a lovely interval between Eyvil Tyde, of soft easy listening relaxation. Of course, it had is moments of infectious catchy lines that got the body moving which gave you a great warm fuzzy feeling; reminiscent of Amy Winehouse’s soulful voice at her peak, Kerry Sheree really cut to the heart of the songs, highlighted by the incredible and haunting cover of Fleetwood Mac’s ‘Dreams’. A true gem to catch if you get the chance. Up next came Londoners EvylTyde(6), their biggest aspect of the band came from the incredible stand-in drummer, Alice Bates who shows us exactly how its done; the riffs were catchy, up beat and full of zest. The influences of classic 80’s British metal is clear to hear, the Iron Maiden riffs are blatant, and the Tygers of Pan Tang overlay is there too; if there was anything that lets them down it’s the tone of vocalist Hannah Delaney who doesn’t quite catch the same quality as the rest of the band, I’m putting it down to an off day or sound. Once again, equality holds its head up high with full female force, Haxon(8), as the trio from South Wales belted out some great rock anthemic tunes to the gathering throng. The energy of the young ladies was so obvious, loving every minute of being on stage. The day of the femme fatale was well and truly in its flow and the little gang continued to belt out some fantastic original tracks that kept the crowd going. A definite one for the future, Haxan is one to watch for sure.

Theia UK(7) took on the acoustic stage; they had an interesting country vibe with great vocal harmonies, the duo showed us some fantastic acoustic renditions of their original songs. They had great crowd interaction which went so far as a Mexican wave and political banter around said wave. They had some fantastic tunes that were full of pace and up beat vibes, highlighted by their tongue and cheek ‘Whoop de f**king do’ as it looks at modern society and reality tv wannabes wanting everything free. I can’t wait to see what these guys can do plugged in. The Clevedon boys Kikamora(5) was nothing particularly special; their Trad Metal meets Hard Rock and Blues vibe doesn’t hold any surprises. The sound was generic, the lyrics typical of their genre and the vocals weren’t much to talk about either. Though not terrible in any way, Kikamora were more background rock and easily forgettable overall; having said that, the introduction of the saxophone was a highlight and something that would have been better introduced earlier on, throughout their set.

Click below to read the full interview with Theia UK.

Gin Annie(8) had superb stage presence on the main stage, pulling out all the stops of their Hard Rock anthems, knowing where to strut, how to and timing it to get the most out of the stage and audience. Though generic Hard Rockin sound, Gin Annie made up the rest in panache; they just knew how to absorb the crowd into the music. The balance of vocal harmony and rifts blend extremely well; the small twists of Southern Rock that creeps in livens up the songs and overall sound. Damn Dice(7) definitely showed off their colours even unplugged; their Trad Metal meets Hair Metal Revival is something to be admired when pulling it out without electrics, sowing off influences of Motley Crue and Poison with ease. They dominated the stage with their presence and numbers, even temporarily takin on a sixth member as one of the many children invaded the stage with her pink inflatable guitar, much to the enjoyment of the band. The high octane set gave us all a taste of their real style with fun loving riffs and harmonies. The varied vocals that possessed some serious high-pitched wails were brilliant and a common attribute for their genre trade; definitely a band on the rise and one to keep an eye out for.

Bringing their own blend of Heavy Metal, Ramage Inc.(9) can never be pigeon holed; riffs that can be as dark as Doom Metal mixes vocal growls of modern metal and then twisted evermore with aspects of Thrash, NWOBHM, Goth and Black Metal, they deliver on all fronts. Possibly ahead of their time, their delicious riffs were addictive and powerful. They were a marvel worthy of being placed on a pedestal of Scottish Heavy Metal. As last year saw them on the acoustic stage, Bad Pollyanna(9) graced the main stage to give us their full force of Goth and Alternative Metal. Olivia Hyde was just stunning, her energy and passion shone through the entire set; the riffs were infectious and dragged you into the world of Bad Pollyanna. What really made this a set to remember was the incredible showmanship and charisma that just oozed from the quartet, a set that saw new material in the anthemic ‘Song of Your Escape’ from their upcoming album; Bad Pollyanna are back. Silk Road(7) gave us more acoustic goodness that had twangs of country style sound; much like the rest, Silk Road showed off some of their original tracks unplugged over two sets. It’s difficult to judge their true sound from their unplugged versions but as their set continued their music shone through with clear vocals and pleasant melodies.

It was time for the penultimate band of the evening, Dendera(8); the Power Metal vibe was infectious, the speed of the chords was incredible, coupled with the typical style of lyrics, though with some political spin such as ‘Age of the Agony’ and the crowd loved them for it. Denderabring the high octane shredfest up a notch. The Speed Metal is heavy in the air as is the high-pitched vocals. With influences from all corners of the Power Metal genre, Dendera bring on the catchy riffs, harmonies and vocal power like all the greats. Finishing off the evening of festivities was Rocksector’s Absolva(9). With Luke Appleton on tour with Iced Earth, Absolva looked to their past to bring in Tom ‘Aky’ Atkinson of Vice to fill in for the show as double lead guitarist. Slotting in as if he never left, it meant that Absolva could continue their mesmerising twin lead ferocity. Chris Appleton and co. were on form once again keeping the British Heavy Metal scene alive and shining brightly. You can never take away Chris’s ability to lead, learning Blaze Bayley, it would appear the apprentice has surpassed the master of showmanship. One of the best of the new generation of British guitarists on the scene, coupled with the dynamite shred master of Tom Atkinson, another of the new generation, Chris is a role model for the next generation to come. The shreds and melodic riffs were stunning, packing in all the favourites like ‘Defiance’, ‘Flames of Justice’, ‘Code Red’ and ‘Never Back Down’ just to name a few, Absolva brought the DefianceTour to SOS Fest. It was the perfect was to finish off the day, SOS Fest was at its apex. There were a lot of sleepy little ones and a lot of excitable big ones at the end, which mean that it was a little time for the crew to dabble on stage as Xcelerator kicked off the after party with some classic covers, which led to a DJ set into the early hours of the morning.

Click below to read the full interview with Dendera.

For the full gallery of photos for Day 2 click Here